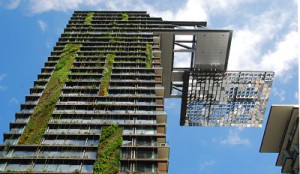 Entire suburbs and cities across Australia could be formally declared carbon neutral by the Federal government from as early as 2017.

In a move certain to spur investment in the renewables sector, the Turnbull government on Tuesday revealed will expand official carbon neutrality standards to now include buildings, precincts and cities in the zero-emissions certification mix.

The big push to expand what can be counted as carbon neutral comes despite the ongoing absence of a formal carbon trading scheme or pricing instrument in Australia; a situation many expect or at least hope will change irrespective of who wins the looming federal election.

Until then, the Turnbull government is doing what it can to demonstrate its environmental credentials through practical steps that cut carbon pollution and reduce energy consumption.It’s also politically fortuitous that as the mining and heavy manufacturing sectors decline, businesses that enable energy efficiency and sustainability is emerging as growth engine for jobs.

“We have listened to requests from the community, cities and business to expand the National Carbon Offset Standard – which enables businesses, products and events to be certified as carbon neutral,” Environment Minister Greg Hunt said.

Mr Hunt said the government was now establishing an expert committee for carbon neutral precincts and cities, with the aim being to have at least one certified by 2017.

The move to widen carbon neutral certification eligibility, which at its core looks to renewable energy and efficiency, is a notable change in tone from previous environmental policies that included appointing a National Windfarm Commissioner to look into complaints and the negative impact of the turbines.

The specific involvement of cities and precincts in the new certification standards also neatly tie into the creation of a new Assistant Minister to the Prime Minister for Cities, Angus Taylor – who is charged with taking a whole of government approach to making cities more liveable, affordable and productive.

Mr Hunt said the first meeting of the new Expert Committee was scheduled for April 2016 this year, with its members including representatives from “big cities”, the Barangaroo Delivery Authority, the Green Building Council of Australia, the National Australian Built Environment Rating System and the CRC for Low Carbon Living.

Participants, including the Green Building Council of Australia (which promotes sustainable buildings and building practices) immediately welcomed the move as a positive step to put a dent in carbon emissions.

“We applaud the Turnbull Government’s commitment to expand the standard to include buildings, cities and precincts, and are delighted to participate in the Expert Committee,” the GBCA’s Chief Executive Officer, Romilly Madew said.

“Our cities are responsible for as much as 80 per cent of our national energy consumption, which means they are at the frontline of any efforts to tackle climate change.”

The GBCA says Australia now has more than 1,050 “Green Star” projects across the nation.

“We are looking forward to collaborating with the Australian Government and other key stakeholder groups to ensure the carbon neutral standard gives our industry the tools and recognition it needs to work towards a low-carbon future,” Ms Madew said.