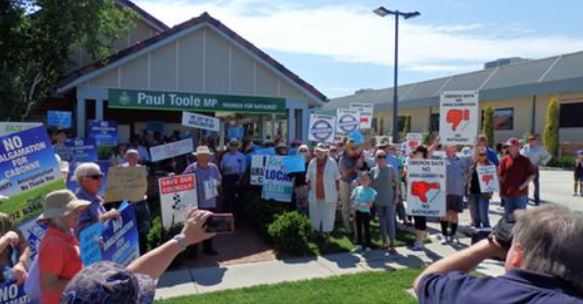 A new community petition calling for NSW Local Government Minister Paul Toole to either resign or be sacked has started doing the rounds of affected local government areas as rebellious councils and ratepayers try to stare down State Premier Mike Baird’s controversial plans to axe 40 of NSW’s 152 councils.

With the public inquiries done and written submissions due to close on Monday February 28, a steady flow of angry public meetings and demonstrations against forced council mergers is continuing as the Baird government works towards its aim government of having arrangements in place by mid-June 2016.

The latest online petition, signed by 127 people so far, accuses Mr Toole of having contempt for the sector he is supposed to represent, “by continuing to bully and manipulate communities, council staff and elected representatives.”

The rise of the social media groundswell comes as the State Government continues with it’s paid advertising campaign that [paints the current systems of local government as broken and antiquated.

The petition calling for Mr Toole’s head says he has not presented enough evidence to justify why councils should be merged, that he intentionally held back most of the KPMG report used to justify forced mergers, ignored the risks of mergers and fabricated stories about councils being broken and heavily in debt.

“His work is sloppy and shabby,” says the petition on CommunityRun. “All the amalgamation proposals he has presented are deeply flawed documents full of serious inaccuracies which are clearly evident.

“Genuine improvements and reforms of the local government sector can be achieved but not through forced council amalgamations and not with Paul Toole as Minister for Local Government.

Phil Jenkyn from Save Hunters Hill Municipality Coalition said the meetings, petitions and demonstrations were “designed to continue to turn the screws on the government, which is what’s happening right across the state.”

On Tuesday night, a rally at Hunters Hill Town Hall drew a significant crowd and a long succession of speakers each had a minute to voice their love for Hunters Hill and sang traditional songs.

With the are expected to continue over coming weeks, it is understood a number of federal Coalition politicians are becoming increasingly concerned contaminant from local government issue could spill over into a looming Federal Election campaign in Coalition held seats as voters seek to send a message through whatever means available.

Two key elements are fuelling resentment. One is a strong perception that the consultation was largely railroaded from the start. The second, and potentially more damaging, is that larger councils will necessarily become more disconnected from the community and are unlikely to be any more efficient in terms of finances and processes than existing councils.

In December voters in the blue ribbon Liberal seat of North Sydney delivered a stinging 13 per cent swing away from the Coalition in a federal byelection necessitated by the resignation of former Treasurer Joe Hockey, although Liberal candidate Trent Zimmerman still won the seat by a comfortable margin, with Labor not fielding a candidate.