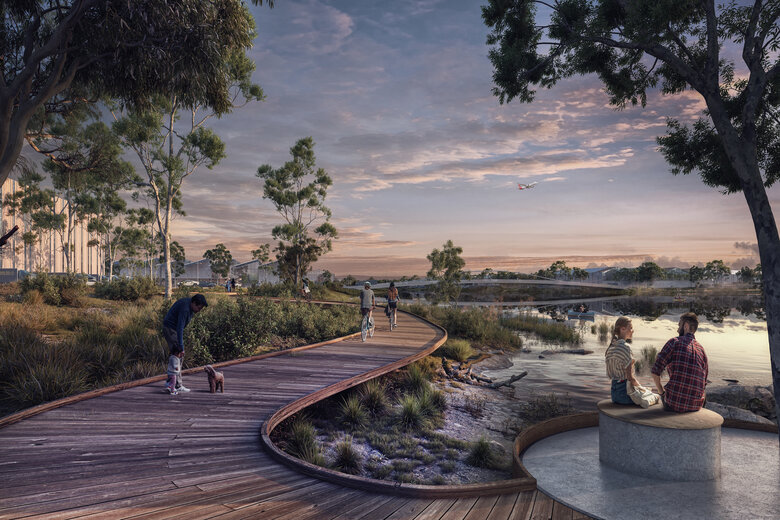 The total cost of infrastructure delivery for the Aerotropolis is estimated at up to $100 billion over the next 20 years.

The NSW government plans to collect $1.1 billion from developers to help fund infrastructure at the Western Sydney Aerotropolis.

But the funds, to be levied via a Special Infrastructure Contribution (SIC), represent just a portion of the total cost of infrastructure delivery for the airport city, which is estimated at up to $100 billion over the next 20 years.

It’s proposed that the (SIC) will be imposed on new residential and non-residential development across the 10 precincts identified in the Western Sydney Aerotropolis plan.

It will initially apply to the six precincts that are already rezoned and will be introduced across the board when the remaining four precincts are rezoned.

The government is proposing two levels of contributions. There will be a charge of up to $500,000 per hectare across the Aerotropolis, and a 2 per cent station precinct levy will apply for developments near the two proposed Metro stations.

Educational facilities, public and affordable housing and housing for older people will be exempt.

“It requires a significant investment from all layers of government as well as contributions from landowners.”

Landowners would benefit from the uplift in value from the development and should contribute to infrastructure costs, he said.

Too much too late: developers

Urban taskforce CEO Tom Forrest said while it was fair enough to ask for an infrastructure contribution from developers, the government had left the announcement two years too late, putting developers at a disadvantage.

If you put that to any developer they’re just going to look at you and say ‘that’s not going to wash’.

It also came on top of a “massive” levy planned by Penrith and Liverpool councils, which are seeking a 6.5 per cent local infrastructure contribution, he said.

“What you’re talking about is $500,000 per hectare in mixed use plus an additional two per cent if you happen to be near a station, and in addition to that you have to add what Penrith and Liverpool council have just announced, which is up to 6.5 per cent,” Mr Forrest told Government News.

“If you put that to any developer they’re just going to look at you and say ‘that’s not going to wash’.

However Mr Forrest welcomed an SIC now being “out there” saying it would allow developers to include the additional costs in purchase prices and move forward.

“The PIC outlines in great detail what infrastructure is needed, where it should be located, when it should be delivered and how much funding it needs from a variety of sources,” Mr Stokes said.

The government has identified Camden, Campbelltown, Liverpool and Fairfield as the next areas in which infrastructure needs will be assessed.

The precinct plans, SIC and PIC are on exhibition for community feedback until December 18 2020.