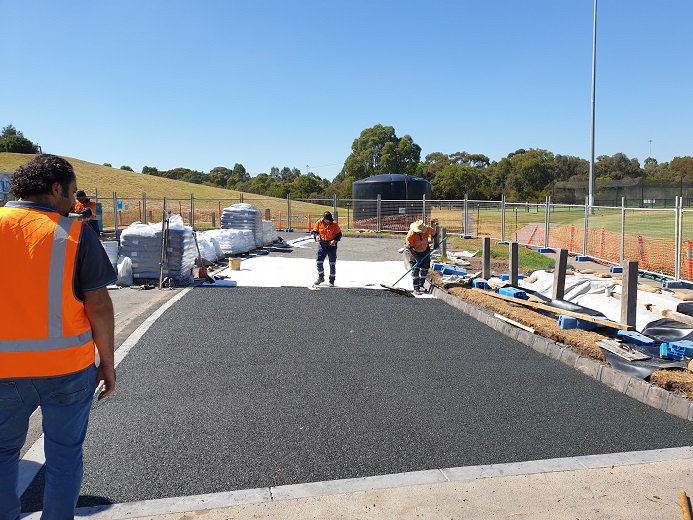 The permeable pavement is made from 70 per cent recycled tyres, sourced from a local facility. (Image supplied by City of Yarra)

The permeable pavement in the City of Yarra is part of a trial developed by Melbourne University and funded through Sustainability Victoria’s Sustainable Infrastructure Fund.

The pavement, located in the Melbourne suburb of Clifton Hill, is made from around 70 per cent recycled tyres sourced from a local Victorian facility.

The tyres are combined with glass and rock particles to give the pavement the strength needed to sustain the weight of cars and other vehicles.

A council spokesperson told Government News the project is an “innovative approach” to its Integrated Water Management Plan.

“By using this new technology, we aim to improve waterway health, better support tree growth in Yarra and reduce waste.”

The site at Ramsden Street was chosen due to its location, Council said.

The trial, which will conclude after two years, aims to improve stormwater quality and reduce the amount of pollutants entering downstream waterways and potential impacts of urban flooding.

The material in the pavement is porous, which means that when it rains, it stops stormwater from pooling on the surface.

Instead, it drains through the porous material and is treated before entering the drainage networks.

“The secondary treatment of stormwater is done through an underground material called ‘activated media filter’.”

It will remove dissolved contaminants commonly found in storm water, including nutrients, metals and hydrocarbons.

“This recycled material acts as a natural filter, cleansing the storm water of medium to large pollutants.” – Council spokesperson

Contributing to the circular economy

The technology for the pavement was developed by Associate Professor Mahdi Disfani from the University of Melbourne.

He experimented with different solutions before finding one capable of sustaining traffic loads.

“The pavement technology used by City of Yarra has two major differences to other common pavements like those we see on roads or parking lots,” he told Government News.

“The technology used by City of Yarra is highly permeable, this means this pavement allows for the water to go back to the ground and keep the ground moist and help the trees receive the much needed water.

“Second, it has a very high percentage of waste recovered tyres…(with) three end-of-life-tyres per square metre, which is a significant contribution to circular economy.”

Council will work with the University of Melbourne to monitor and observe the trial over the next two years.

“We will look at evolution of permeability and infiltration rate over the coming years, which will tell us how the efficiency of system in collecting rainwater will evolve over time,” Associate Professor Disfani said.

“With the changing climate and unprecedented floods and growing issue of waste, it is essential for councils and other government organisations to use technologies which solve more than one problem at once,” – Associate Professor Mahdi Disfani

If the trial is successful, Council will consider applying the pavement technology to future projects.

It is currently paving sections of Rutland Street’s parking bays in Clifton Hill with permeable pavement made from recycled tyres, in a partnership with Sustainability Victoria.

Construction on the parking bays began in March and are due to be completed this month, with changes to be made to six car parking bays along the street.

Council will monitor it over two years to determine the benefits for newly planted trees, long-term durability and potential improvement of waterway health, including reduction in quantity entering downstream waterways.

The permeable pavement technology was first trialled in 2019 at a carpark in the City of Mitcham in South Australia.

Since then, other councils such as Boroondara, Darebin, Moreland and Banyule have also used the technology.

Associate Professor Disfani said the technology is “rapidly spreading” across Australia and is used in footpaths, bike lanes and parking areas.

“With the changing climate and unprecedented floods and growing issue of waste, it is essential for councils and other government organisations to use technologies which solve more than one problem at once.

“Waste Tyre Permeable Pavement Technology used in this project is an Australian-born innovation which can benefit our cities and people.”