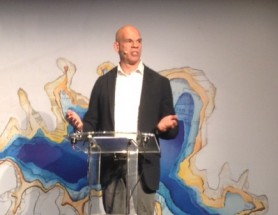 It’s less than a month since Paul Shetler arrived in Australia as the chief executive of the Cabinet mandated Digital Transformation Office, but he’s already on a rapid fire a roadshow to muster support from federal and state bureaucrats alike.

The big picture is simple enough: the Australian government needs to get digital fast and people need to have the same high quality of unified and seamless user experience offered by the likes of Uber and Amazon.

“We are makers, we are doers. And our goal is to have Australia become the best in the world at providing digital public services,” Shetler tells a crowded room in Sydney at an Adobe event.

“We think that can happen. The scope of ambition is, I think, relatively unique and the backing we have had has been fantastic …we are really stoked by this and quite excited.”

New South Wales Finance, Services and Property Minister Dominic Perrottet, who is in the audience and speaking next, is excited too.

Less than 10 minutes after Shetler delivers a rousing speech that talks-up a single government customer interface for all tiers of government, Perrottet drops a bomb that Service NSW is launching its own online customer account – more or less the equivalent of myGov for NSW.

It’s something Shetler clearly wasn’t expecting, not least because of the clear potential for the kind of divergence in standards – this time on digital identity – that has resulted in disparate and incompatible information silos for decades.

For some in the room it looks like he’s days into the job and the cracks are already appearing.

Shetler takes the announcement in his stride, but it’s what happens next that’s more intriguing.

The immediate backchannel talk from New South Wales is that the development and announcement of the state’s digital account has been has been coming for months, but it’s certainly not mutually exclusive.

Moreover, now that Canberra has finally installed its own digital change agent and chief cat herder, there’s a lot more to work with in terms of certainty and commonality going forward.

There’s also clearly an appreciation from both sides that an online replication of Australia’s infamous rail gauge fiasco needs to be avoided in everyone’s interests.

Shetler’s boss, federal Communications Minister Malcolm Turnbull has for more than a year been championing the myGov account and digital credential as the major leap forward in connecting federal services online.

As revealed by Government News last year, Turnbull has been clear from the outset that there needs to be commonality on digital transactional standards for government, saying in September 2014 that he was willing to extend myGov not just to state’s but to councils.

“We want everybody to have access to one, single digital mailbox which we will make available to all governments for free – I mean state and local – so that there is greater and greater incentive for people to interact with government digitally,” Mr Turnbull said at the time.

(The same speech also effectively threw any ambitions within Australia Post of becoming a national government digital credential monopoly for profit under a bus.)

What’s changed since then is that NSW, more than any other state, hasn’t been waiting around for Canberra to get its act together on the digital front as Perrottet and Service NSW set about reforming service delivery there to a digital first, single touch user experience.

“The Service NSW online platform was launched in 2013, following extensive customer research and identifying simple and easy to use functions.  The digital account is an extension of this platform which has proven to be a great success with customers and is highly regarded by the government sector,” a spokesperson for Service NSW told Government News.

“The digital account design and development teams researched the customer experience, privacy and security standards of similar government and private sector digital accounts, including myGov, to learn from their experiences and identified best practice and additional functionality that could be incorporated into the design of the account.”

Importantly, it’s understood there’s firm push from NSW for some sort of contestability in terms of the ideas and standards behind the delivery of digital services. The rationale is that it’s not just about getting up the best quality products and services, but ensuring that they also fit together well so they are transportable.

To be fair, Perrottet has from the outset pushed cross-jurisdictional sharing and system access, especially in the area of procurement reform and technology.

The immediate and big question that now arises is whether two potentially disparate government digital account services from NSW and Canberra can learn tango in the foreseeable future, a synergy that would let common users can securely hop between federal and state accounts in the one session.

Obvious use cases for interoperable digital credentials between federal and state governments, and logically councils aren’t hard to find. Just take the myriad of concessional entitlements that now require over the counter verification. Think concessional public transport fares for job seekers or discounted council rates and other state services for pensioners.

And there could yet be hope.

Government News understands discussions are already underway between Canberra’s Digital Transformation Office and the NSW government about how to leverage both rollouts to share information and verified credentials across all three tiers of government.

The vision seems to be there, even if the mechanics are evolving. Speaking in Sydney, Shetler puts it this way:

“That’s actually what people want… If we can do that across channels we’ll be doing something much more ambitious than any other country.”

Shetler is also adamant that Australia is not alone in its challenges in reforming service delivery, saying the push is part of  “a worldwide movement.”

“It would be foolish not to learn and share,” he says. “Taxpayers have paid for our work. They should be able to reuse it. We should also be able to share our patterns and our code with other countries, that further reduces cost and increases commonality.”

Another factor working in Shetler’s favour is that when it comes to nutting out interoperable standards for transactions – which is what digital identity really credentials enable – he has strong form.

As the former head of interface applications and product innovation at SWIFT – the body that sets the standards that underpin the global interoperability for financial instruments like credit and debit cards  – there’s a better than usual chance he can negotiate his way through Australia’s administrative and political morass of competing interests.

“The goal is to get to that point where people have a relationship with government, not state, not city, not federal,” Shetler says.  “I think people are thirsting for it. People want that.”