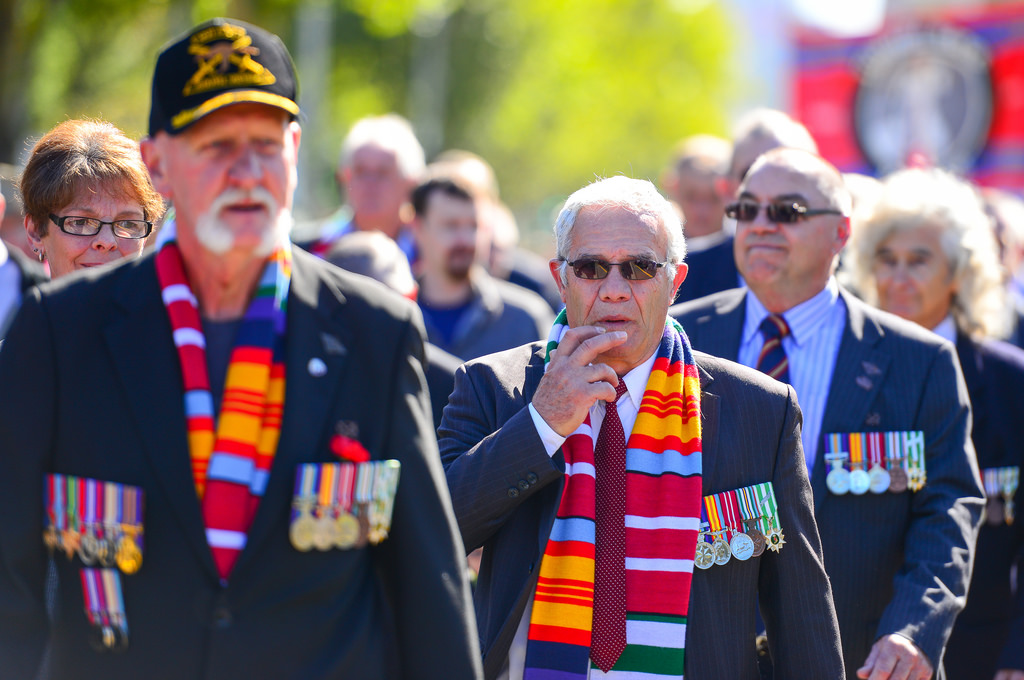 The Community and Public Sector Union has moved to reassure war veterans, their spouses and widows that any industrial action it takes in a dispute over below inflation wage deals will be aimed squarely hit the Abbott government and public service bosses rather than customers of the Department of Veterans Affairs.

The union on Wednesday successfully obtained permission from the Fair Work Commission to hold a ballot of its members at DVA over whether to seek permission for protected industrial action, the first step in potentially going to a series of legal strikes or work bans.

“Our members are very aware of the needs of veterans, war widows, war widowers and their families because they deal directly with them every day,” said a CPSU spokesman.

“The relationship DVA staff have with their clients is very important and it won’t change in the event of industrial action. The target of the action is the Government and the DVA who need to come up with a sensible deal so staff can get on with the job of serving our community.”

The government has pounced on the application to go to a strike vote, with Employment and Public Service Minister Senator Eric Abetz branding the move towards industrial action as “an attempt by the [CPSU] to threaten the Government with absolutely no regard for the impact this may have on the most vulnerable in our community.

“It would be highly unfortunate if industrial action disrupts the processing of pensions and other payments to vulnerable Australians in the lead up to Christmas,” Senator Abetz said.

But the conspicuous talking-up of disruption of payments and frontline services is something that both agencies and the CPSU have been at pains to point out they will do everything to avoid.

The Department of Human Services, which is also in the frame for industrial action with its own protected action ballot underway, has already slammed reports prior to Senator Abetz’s comments that health and welfare payments would be disrupted by industrial action as “incorrect and reckless.”

Senator Abetz’s comments have also delivered a hospital pass to the management at the Department of Veterans Affairs and its Minister Senator Michael Ronaldson who now have the unenviable choice of contradicting a Cabinet minister or copping a backlash from fearful and vulnerable customers.

Government News is seeking a response from Senator Ronaldson’s office in regard to Senator Abetz’s comments.

The Fair Work Commission’s orders on the DVA protected action ballot reveals a host of other tactics the CPSU appears more likely to try to wear down the government including communicating the union’s position to customers.

Although the option of work stoppages of up to 24 hours is being put to members, so too are so-called ‘slow-burn’ tactics like not answering internal phone calls or responding to voicemail and emails, working strictly to roster hours, attending meetings with management and reporting on the progress of recipient claims to management.

Another serious challenge the Abbott government faces is that taking a such hard line stand against the union on below inflation wage deals, coupled with the dilution of conditions, could actually increase public support for industrial action across the Public Service.

Prime Minister Tony Abbott has already been dragged into the industrial row after he was forced to defend the government’s below inflation pay deal pushed onto Australian Defence Force members who effectively have to take what they are given and do not have a legal right to industrial action.

On Tuesday the Defence pay row out the unveiling of an extension of Sydney’s infamous M5 motorway on an unexpected detour after a social media backlash appeared to catch the government by surprise.

“We’d all like to pay our serving Defence personnel more, but there’s going to have to be very tight pay restraint across the public sector, including the Defence personnel. I regret that,” Mr Abbott said.

Mr Abbott then uncomfortably sidestepped the fairness of the Defence pay deal when asked flat out if a below inflation pay deal was a cut in wages in real terms.

“We’re going to see restraint across the whole of the public sector and I would be very surprised if anyone in the Commonwealth public sector receives more than is received by our Defence Forces,” Mr Abbott said.

A real problem many government backbenchers fear is that voters remain deeply wary of the resurrection of the ‘Work Choices’ industrial debate that helped dispatch the Coalition from office in 2007 after the government’s botched sales job was targeted by a strong union advertising campaign which successfully harnessed fears that longstanding conditions would be jettisoned.

Some elements in the Coalition are known to hold reservations about Senator Abetz having carriage of the public sector workplace debate feeling he makes an easy a target to demonise.

The CPSU certainly isn’t letting that opportunity go to waste

“Staff are prepared to take action to get the Government to shift its position and allow Veterans’ Affairs to strike an acceptable deal.”

“Veterans’ Affairs is one of more than 70 Commonwealth agencies unable to make a deal because of this Government’s inflexible and harsh bargaining policy. Senator Abetz is forcing agencies to strip conditions from workplace agreements and cut workplace rights in exchange for low-ball pay offers,” Ms Flood said.