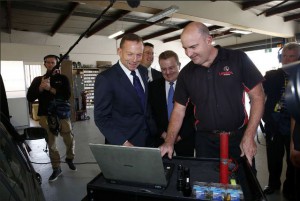 Prime Minister Tony Abbott has become a big fan of an iterative approach responding to the challenges of government – and it’s not limited to rotating the Speaker of the House of Representatives and reviewing travel entitlements of federal politicians.

Mr Abbott on Monday very conspicuously threw his support behind the rapidly evolving federal Digital Transformation Office (DTO), taking to YouTube to officially plug the start-up agency as well as the valuable work of public service technologists across Australia mustering in Canberra on Tuesday for the annual Technology in Government summit.

“I want to assure you that your work is critical to our nation’s future,” Mr Abbott told delegates.

“It’s crucial that all levels of government have the best IT to serve our communities. Dealing with the government should be as quick and as easy as dealing with any other business.”

Mr Abbott said that the DTO had been tasked with ensuring that services “are simpler, faster and easier to use” adding that this was the same reason why the government was undertaking “a complete rebuilding of Australia’s social welfare infrastructure, a project that will benefit literally millions of Australians.”

The arrival of the DTO as an agency proper could not come at a better time for a number of ministers and heads of the largest federal agencies who have recently had to fend off criticism surrounding electronic customer service issues at the Australian Taxation Office and the Department of Human Services.

While both ATO and Human Services will ultimately require core systems rebuilds estimated by Treasurer Joe Hockey to cost in the “billions”, DTO chief executive Paul Shetler has for the last fortnight been spearheading a charm offensive across federal agencies to tell them it’s the delivery of a simple, clean and fast user experience that is his ultimate goal, not tinkering with tech procurement, which still rests with the Department of Finance.

For those who work in and around the labyrinth of Canberra’s technology substantial infrastructure, all eyes from government and industry are expected to be on Mr Shetler on Tuesday when he fronts the 9th Technology in Government event to spell out to the technocracy what the DTO plans to do, and what it doesn’t.

After less than a month in official existence, the DTO says it wants “to deliver a way for citizens and businesses to transact with public services simply and securely” but “without needing to bring along a dozen forms of ID every time you did.”

To get the ball rolling the DTO says it is convening a roundtable “featuring leaders from the consumer, IT, identity policy, security, government, and business sectors to thrash out the issues to help it develop “a Trusted Digital Identity Framework” with more details (like dates and places) soon to come.

The inclusion of both state and local governments as well as the wider business community is a highly notable step forward because it recast the present highly compartmentalised treatment of identity credentials, both digital and physical, into something that approaches common sense.

Businesses that are bound by proof of identity regulations, ranging from banks to telecommunications providers and even pubs and clubs have a vested interest a nationally  interoperable solution being created because they stand to save potentially billions in physical document verification costs.

For example a credit card application can require a passport, driver’s licence and a rates or utilities bill to all be presented at a Post Office for verification.

The requirement of a recent bill, usually to demonstrate proof of address, is set to become a an increasing problem as businesses and government departments increasing stop sending paper mail, a situation that has already landed Australia Post  deep in red ink.

Ironically Post itself had previously expressed ambitions to become the national digital identity one-stop-shop, even floating the idea of being given a mandate for government departments to use its Digital Mailbox.