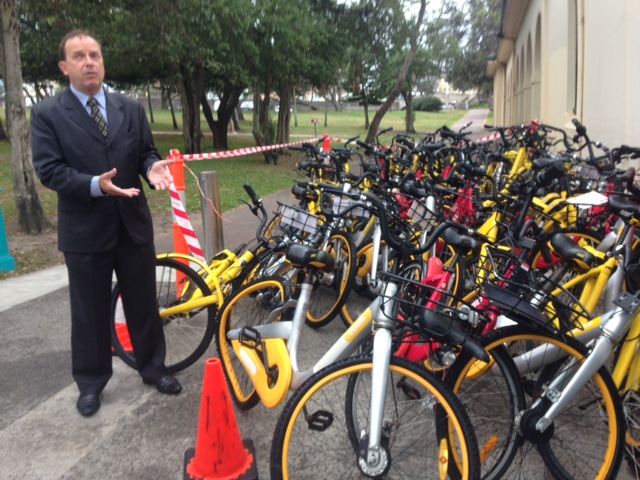 On Monday the latest development in the long-running saga over dockless share bike schemes in Sydney saw Waverly Council impound more than 60 bikes from local beaches, parks and streets.

Waverly Mayor John Wakefield with the impounded bikes on Monday.

The seized bikes can be released to the scheme operators for a $70 fee per bike, while those that go unclaimed will be recycled, the council said.

Waverley Mayor John Wakefield said the council was forced to act “due to the number of damaged and discarded bikes building up in public spaces.”

While welcoming the schemes’ efforts to increase the number of alternative transport options, the Mayor said operators needed to take responsibility for the management of their bikes.

“We have undertaken this clean-up in order to get this scheme to work.”

While they had complied “to a certain extent”, around 60 share bikes were removed by rangers for impoundment on Monday afternoon.

The Mayor called for State Government legislation on share bikes “so that operators were clear about the consequences of poor management of bike share schemes.”

“It’s an unfortunate use of ratepayers’ money to have to clean up this mess but if bike businesses won’t do it, Council will,” he said.

“I welcome the council finally enforcing the existing powers they already have to manage footpaths and public spaces under the Local Government Act. I hope to see other council’s follow suit.”

A spokesperson for Randwick City Council told Government News the council would continue to collect bikes that were causing an obstruction, but at this stage it was not undertaking the same level of impounding as Waverly Council.

She pointed to the rules agreed to in January by bike share companies and six Sydney councils, including Randwick, in a bid to improve public safety and ensure that bike usage continues to increase.

Those guidelines set out minimum standards and expectations for dockless bike share operations in Sydney, and focus on issues of customer safety, bike placement, distribution of bikes, dealing with faulty and dumped bikes and data sharing.