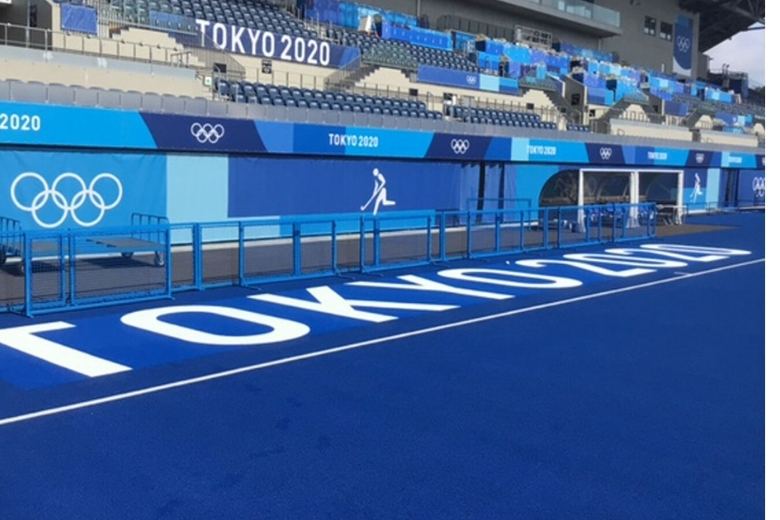 Poligras by Polytan has been the official hockey surface for seven Olympic Games including Tokyo 2020, and has signed on for the next two Games in Paris and LA.

As we celebrate the start of the thirty-second Olympiad in Tokyo this week, Poligras by Polytan is reflecting upon over 40 years of being Hockey’s Best Partner.

Poligras by Polytan has been the official hockey surface for 7 Olympic Games including Tokyo 2020, and has signed on for the next two Games in Paris (2024) and Los Angeles (2028).

The Moscow Olympics welcomed the first Poligras hockey turf which was made from polypropylene fibres.

Although these early Poligras turfs were a major advancement in synthetic grass, they had a grain and were hard, which sometimes caused the ball to bobble.

To celebrate the new millennium, the Sydney Olympics saw a colour other than green added to the surrounds of the artificial turf pitch for the first time.

Australians and hockey fans rejoiced as the Women’s Hockeyroos team won gold literally on their home turf which was made right here in Australia.

In 2003, Poligras turbo-charged the game by introducing turf made from polyethylene fibres.

These fibres were more durable but crucially softer and less abrasive. This softness meant the ball sat on the surface better, giving the players more control and allowing the ball to be moved at higher speeds. Softer turf reduced the bounce making 3D skills possible and the players felt confident to run faster and dive.

Poligras by Polytan debuted a new London Blue turf at the 2012 London Games. It was designed to broaden the appeal of the game, so that it was electrifying for players, and would provide viewers with a better visual experience on TV.

Poligras by Polytan reinvented turfs again in 2014 ahead of the 2016 Games in Rio, with new texturized turf technology creating a multidirectional fibre shape. This totally removed the grain and therefore any resistance to ball movement. Ball control was now limitless.

The skills could now be fully fluid, 360° & 3D. This turf innovation added more rocket fuel to the game with greater control, creativity, and speed.

The technology was also developed to hold water better, resulting in up to 50% less water required for match play. The Poligras Platinum turf used for Rio 2016 was a performance and environmental breakthrough. And the standard of hockey reached a whole new level again.

“We chose sugar cane-based PE technology as it gave us the highest yield of renewable content whilst also delivering on all technical performance requirements for players. Our PE used is based on more than 85% sugar cane and just 15% standard petro-chemistry,” explains Stefan Sick, Director of Research & Development at Sport Group in Germany.

Another sustainable feature includes a shock pad that sits underneath the surface which uses fully recycled rubber and a binder that has been produced with CO₂. This world-first component called cardyon® – a polyol containing CO₂, reduces the amount of crude oil required in the binder by 20%, and is a huge advancement in making the chemical and plastics manufacturing industries greener.

“To achieve a ‘totally green supply chain’ we must make our Green Technology more sophisticated and include it in all components and go beyond yarn,” comments Stefan. “We are building a full Green Technology product range that will include other sports applications and other products, for example football products. Tokyo GT is a major development, but it is just the beginning.”

As the leading company dedicated to the design, construction, manufacture, installation and maintenance of synthetic sports surfaces, Polytan is committed to making sport.

Polytan holds a unique position in the market. Being a part of Sport Group – the world’s largest business dedicated to sports surfaces, Polytan and its customers benefit from the Group’s fully integrated global supply chain. This means Polytan delivers unmatched quality control and complete customer transparency.

Their surfaces are made in Australia at their ISO certified manufacturing plant in Melbourne, and are the only synthetic turf manufacturer to make yarn in Australia.

Polytan is committed to bringing people and communities together through sport, from Olympic athletes through to grassroots superstars.