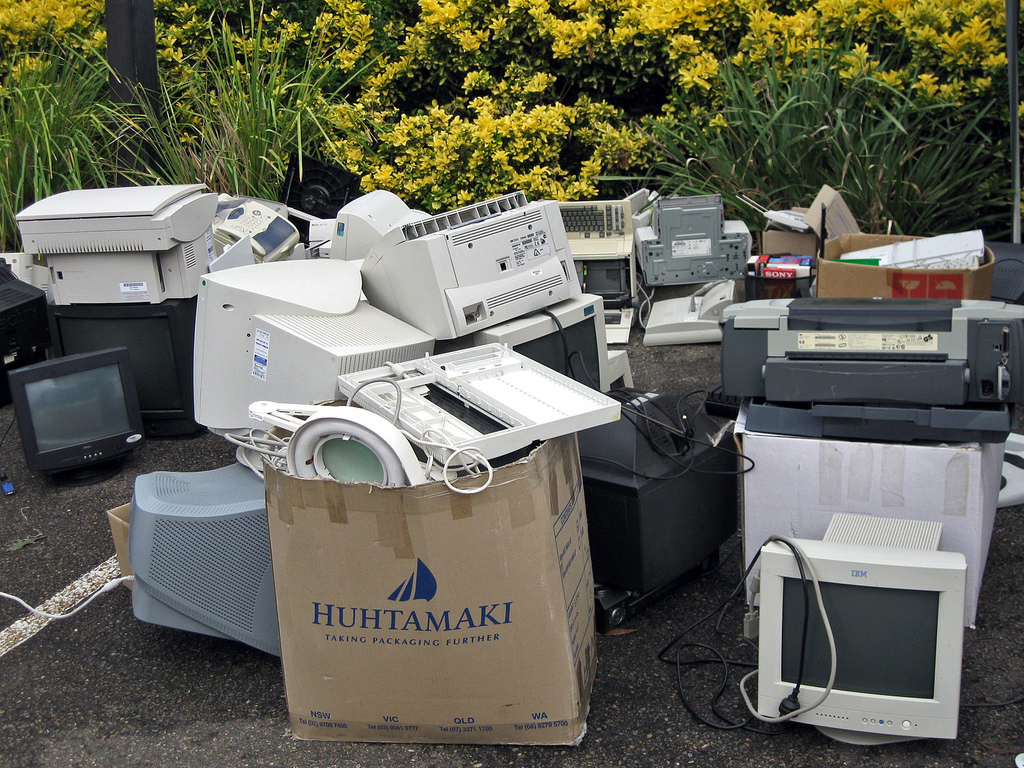 Social businesses that create employment for the disadvantaged while contributing to sustainability have been heavily championed by government, but there are signs of serious problems emerging for enterprises trying to stay afloat under the federally mandated recycling regulations.

A Hunter Valley social enterprise employing workers with disabilities to recycle televisions and computers closed its doors yesterday, citing ongoing problems with the National Television and Computer Recycling Scheme (NTCRS) as the reason behind its demise.

The chief executive of disability employer Mai-Wel Group, Pennie Kearney, said problems at its Lower Hunter recycling venture first arose when DHL Supply Chain, the company charged with collecting the recycled e-waste from Mai-Wel, met its 30 per cent recycling target under the national scheme last November . . .  and then refused to make further collections.

According to Mai-Wel, the result of the collection stoppage meant it was forced to stockpile e-waste and subsequently could not get paid for the recycling it had done since November until the next financial year, in July 2014.

“The contract was working well. We were meeting the targets and getting through the work but unfortunately they got halfway through the financial year and said they had met their quota for the year and we would have to stockpile,” Ms Kearney told Government News.

The crisis prompted the five Hunter Valley councils involved in the arrangement to intervene financially by providing bridging for 70 per cent of the money outstanding to Mai-Wel, with DHL forking out the remainder in an effort to keep the jobs viable.

Around 36 people worked at the e-recycling venture, 26 of whom have a disability.

Despite the financial intervention of local governments, when the overarching e-recycling contract arrangement Mai Wel supplied into was put to tender June 2014, none of the five companies involved in the NTCRS would commit to keeping operations in the Hunter region, pushing instead for a move to Sydney.

The companies operate under what is known as a ‘co-regulatory arrangement‘ and (apart from DHL) include Australia and New Zealand Recycling Platform, E-Cycle Solutions, Electronics Product Stewardship Australia and Reverse E-Waste.

Calling the move out of the region short-sighted, Ms Kearney cautioned other social enterprises were also “being burned” by stockpiling problems.

“I’m very disillusioned with the way it was allowed to occur because the local councils supported us and since the co-regulators took over, there was no recognition of the huge effort and time we put in,” she said.

“We had been operating for three-and-a-half years before they even started [the NTCRS] and now we don’t have a business at all.”

The National Television and Computer Recycling Scheme was set up in 2012 to cope with the avalanche of e-waste Australian households and businesses generate each year, which is growing at three times the rate of general household waste.

It aims to get computer and TV manufacturers and importers to take responsibility for what happens to their products once they’re binned, a mechanism known as product stewardship pushed by successive federal governments.

Under the present system, manufacturers and their importers take part in so-called ‘co-regulatory’ arrangements which set targets for the collection and recycling of e-waste.

The broad aim of the e-recycling scheme is to set out a regime under which technology suppliers contribute to the safe disposal and recycling of their rapidly proliferating products, which otherwise risk becoming toxic waste in landfill, rather than slugging taxpayers with the cost of cleaning up.

In 2012-2013, there were 131 companies in the NCTRS 2012-13 that either imported or made 95 per cent of Australia’s televisions or computers, with the volume of spent consumer electronics and computer waste generated every year growing steeply in proportion to other waste.

Approximately 137,756 tonnes of television and computers were discarded 2012-13 and the industry’s target was to recycle 30 per cent of in 2012-3. This rises every year and will hit 80 per cent by 2021-2. The remainder falls to the state and territory governments to deal with.

Jeff Angel, the executive director of Sydney’s Total Environment Centre said the issue stockpiling once recycling targets had been met was a common problem under the NTCRS and this could leave social enterprises involved in e-recycling struggling to stay afloat.

“Some of the social ventures are being used to stockpile products so these charities become above ground landfills.” Mr Angel said.

“That’s just not responding to demand. The use of targets stymies the rate of collection.”

He called for minimum targets but no ceiling and said the co-regulators who collected more than their target should recoup some of their costs from computer and television companies.

John Gertsakis, Chief Sustainability Officer at Infoactiv and one of the developers of the national scheme admitted stockpiling was an issue which needs to be addressed.

“My understanding is it’s a problem in NSW and Queensland and in particular where social enterprises have been involved in the process and the co-regulators have withdrawn.”

But Mr Gertsakis said the scheme had achieved its recycling targets and had come a long way since it was set up. Only 10 per cent of similar products were recycled in 2007-08.

“In quantitative terms it has been very successful and collected a hell of a lot more than it did before. It’s an important first step,’’ Mr Gertsakis said.

“The imperative now is how to better promote and market the scheme to the community and build positive relationships with councils, retailers and other collection partners and prevent future stockpiles occurring.’’

He suggested targets could be quite a bit higher and more leniency shown to those not achieving them, rather than set them too low.

It was also important for everyone involved in co-regulatory arrangements to do due diligence and scan contracts thoroughly, for example to be aware of the targets set and what would happen once these were reached.

Reliable and trustworthy without the spin

News, views and insights into policy and innovation. Your weekly keyhole into the workings of government.

You have Successfully Subscribed!