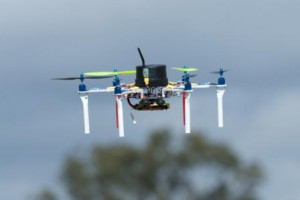 Online juggernaut Amazon might have captured global attention with its ambitious plan to deliver of parcels using a network of robotic unmanned aircraft, but in Queensland the state government is asking school students to come up with real world, life-saving solutions that apply similar technology much closer to home.

The Queensland University of Technology (QUT) and the CSIRO have secured $30,000 in financial support from the Palaszczuk government for an ambitious competition that uses unmanned aircraft to deliver urgent medical supplies to outback locations as part of a bid to inspire students to take up courses and careers in Science, Technology, Engineering and Maths (STEM).

It may be a modest sum, but it’s still a far cry from the outdated stereotype of a sedentary career in IT stuck in cubicle farm churning out code that’s so often been blamed for discouraging promising students from taking up studies in information technology and the hard sciences.

These days the Queensland government is pushing hard to promote its investment in backing the innovation industry as a reason for businesses to invest in the state as it seeks to build a world class talent pool that might other seek work elsewhere or another career entirely.

Known as the Queensland Unmanned Arial Vehicle (UAV) Challenge, the biennial competition will this year be based around the scenario of a fictional character known as ‘Outback Joe’ who requires an EpiPen delivered to his remote property before he goes into anaphylactic shock.

There’s a lot more skill to making the vital delivery than just flying UAV to the site and making the drop according to the rules of the competition. While the aircraft can be remotely controlled, those flying it will not be able to see either the aircraft or the target during the flight and will instead have to rely on sensors and markers on a grid that can only be seen from the air.

“The aircraft must be manoeuvred such that it will pass directly overhead the two hurdles that are laid out on the course,” the rules say. “The dropping of the medical package can be triggered either Remotely by the team’s Mission Manager or Autonomously by systems on board the aircraft.”

Queensland’s Minister for State Development, Dr Anthony Lynham said it was important to get students thinking about real life technology and stressed the importance of the state continuing to cultivate its best and brightest minds.

“The program…is about giving high school students the opportunity to use STEM in a lifelike situation in one of the largest flying robotics competitions in the world,” Dr Lynham said.

“The program here today is about giving high school students the opportunity to use STEM in a lifelike situation in one of the largest flying robotics competitions in the world. As someone with experience in the medical professional, I’m very excited by the prospects that these devices could offer people in difficult circumstances in remote areas,” Dr Lynham said.

Queensland’s Science and Innovation Minister, Leanne Enoch, said engineering and robotics were a vital part of growing a knowledge-based economy in the state.

Ms Enoch said the state government is investing $180 million in the Advance Queensland initiative to ensure today’s students get the skills they need for the jobs of the future.

“The Advance Queensland initiative recognises the importance of STEM in our schools and will expand STEM to coding, computer science and robotics through the $50 million Best and Brightest Fund,” Ms Enoch said.