The location of fixed and mobile speed cameras has long been treated with deep cynicism by motorists copping hefty fines — but there could well be a lot more to the often denied ‘cash cow’ conspiracy than meets the eye according to Queensland’s official bean counters.

Inaction by police and traffic authorities in the Sunshine State has left the government unnecessarily open to valid criticisms that the state’s use of speed cameras is increasingly skewed towards making money instead of preventing accidents or modifying driver behaviour, a stinging new audit report reveals.

A sharply critical assessment of the state’s operation of traffic cameras by the Queensland Audit Office cautions that deployment strategies for the devices “are internally inconsistent and contradictory in regard to ameliorating public concerns about revenue raising.”

The disclosure comes as Queensland authorities issued a whopping 841,401 infringement notices under the state’s ‘Camera Detected Offences Program’ (CDOP) in 2014 at a value of $167 million, $135.8 of which was collected.

At the heart of the issue is whether the way Queensland’s speed cameras are managed and used actually modifies driver behaviour through deterrence, thus preventing accidents, injuries and deaths.

After all, the very justification for most speed and red light camera installations – fixed or mobile – is to dissuade dangerous driving tendencies by slugging offenders with a fine.

A core element of the reasoning behind cameras is instilling drivers with a realistic fear they could realistically be busted anywhere, at anytime to produce what’s known as a ‘general deterrence’ effect where drivers simply won’t risk getting caught.

And to bolster that widespread apprehension, the number of approved sites for mobile and covert speed traps has been increased.

But a big problem for Queensland’s authorities is the state’s Audit Office has now reckoned that Queensland Police Service’s “current deployment practices are more suited to achieving specific deterrence” which is described as the “frequent deployment of cameras to a relatively small number of sites based on [QPS’] judgement of crash potential.”

“A 15.2 per cent increase in the number of approved mobile speed camera sites between 2010–11 and 2014–15 allows the QPS to implement the general deterrence strategy,” the Audit report said.

“Despite this, the QPS mostly deploy mobile cameras in moderately high volume, high infringement areas, even when crash history does not support it.” 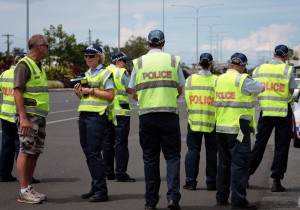 It gets worse too.

While the Audit report certainly doesn’t call the Queensland Police lazy, it does note that “the QPS is not meeting approved covert deployment hours, despite previous research proving its effectiveness in reducing speed across the road network.”

“The QPS mostly roster officers to sites with high traffic flow and high infringement rates during a standard business day,” the report says.

The Audit also noted that Queensland Police Service is “unlikely to have its mobile speed cameras deployed in the right locations at the right time in the right mode of operation to maximise road safety outcomes.”

As for perceptions, the report noted that Queensland Police aren’t exactly helping themselves when it comes to countering public perceptions of using cameras for revenue raising over public safety.

“Deployment strategies are internally inconsistent and contradictory in regard to ameliorating public concerns about revenue raising,” the Audit report said.

“On one hand the QPS have not deployed cameras covertly (in unmarked or not visible police vehicles) when expressly authorised to do so by Cabinet. While on the other hand, they increasingly ignore the system designed to randomly deploy cameras and are locating mobile cameras increasingly at sites with high traffic flows and high infringement rates, but not high crash rates.”

“The first strategy is ostensibly to counter perceptions of revenue raising, but the latter serves to reinforce such perceptions,” the Audit report said.

The Audit report hops into the questionable tactics at length.

“It is not clear why the QPS would adjust its covert deployment strategy due to concerns about revenue raising when the research data indicates such covert operations are likely to contribute more to road safety outcomes than site-specific deterrence approaches achieved through greater visibility.

“The QPS have chosen to remain highly visible, in part to avoid claims of revenue raising, and has moved away from randomised elements of deployment scheduling. Their aim is to address perceived high-risk potential crash sites by focusing on sites with moderate to high traffic flows and high infringements.

“But this detracts from the broader deterrent aims of the program and opens up the QPS to claims of revenue raising.”

As for solutions to counter the impression that traffic cameras are out to fleece drivers, the Audit report offers some firm suggestions.

A key recommendation is that “the Department of Transport and Main Roads comprehensively review all approved mobile camera sites for their ongoing appropriateness.”

That doesn’t mean speeders will find it any easier to avoid fines.

Whether the state government is prepared to take the potential revenue hit and increased costs remains to be seen.