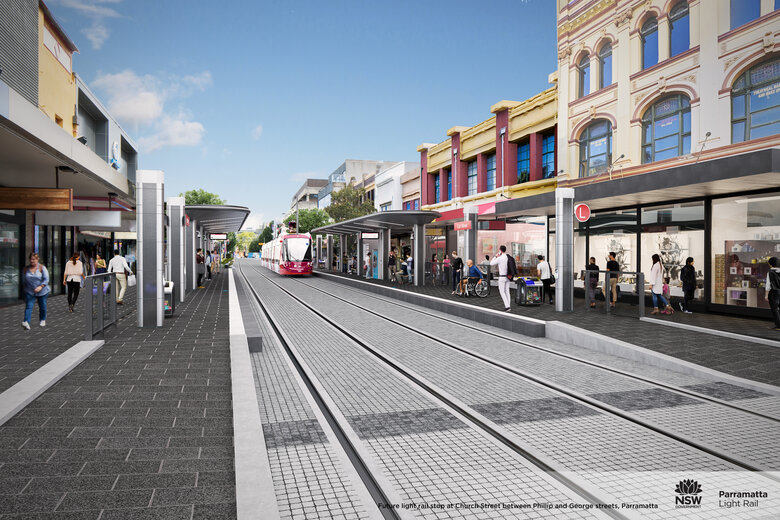 Artist's impression of the Parramatta light rail, which will connect western Sydney to Sydney Olympic Park.

The NSW government will invest more than $600 million to progress work on the Parramatta light rail, ignoring the advice of its own infrastructure advisory body.

Infrastructure NSW on Tuesday released its 20 year strategy to support the state’s infrastructure investment program, which recommends ‘reconsidering’ the project.

Commenting on the release of the Staying Ahead: State Infrastructure Strategy 2022-2042 that day, Infrastructure Minister Rob Stokes said it contained many important recommendations.

Apparently those didn’t include going slow on stage 2 of the Parramatta light rail.

One day later Premier Dominic Perrottet popped up to announce the government had committed more than $602.4  million to progress the project, which will link Parramatta and Sydney Olympic Park.

“This vital piece of infrastructure will support the growth of Western Sydney while linking to another enormous project in Sydney Metro West, improving quality of life by slashing daily commute times,” the Premier said.

“Our strong economic management allows us to continue to invest in the future of our communities to build the projects that make a real difference.”

Infrastructure NSW’s report says there’s been an increase in megaprojects in the state, which it says are by nature expensive, disruptive, contractually complex and demanding of government agencies.

The independent agency says faced with the realities of constrained construction capability, stretched supply chains and skills shortages , “Infrastructure NSW recommends reconsidering the timing and sequence of a number of large, complex projects that are not yet in procurement”, including the Parramatta light rail stage 2.

We need to find a balance between the megaprojects of the past decade and more small and medium sized projects that can deliver great value and be more reliably delivered.

“We need to find a balance between the megaprojects of the past decade and more small and medium sized projects that can deliver great value and be more reliably delivered in a time of a tightening construction market,” he said.

Funding for the ‘transformative’ project will go towards early stage 2 works and building the Wentworth Point Bridge, while detailed planning work for the next stage gets underway, the government says.

Transport minister David Elliott said with 100 per cent of tracks laid for stage one and the construction of stops along Church Street, stage two of the light rail project would change how the community traveled and connected across Greater Parramatta.

“This is a great victory for the people of Western Sydney and a solid indication to the construction industry that the NSW Government is committed to the long-term infrastructure needs of the state,” Mr Elliott said.

The announcement has been hailed by the UDIA NSW, which represents the states development industry and which includes the project as a key demand in its vision for infrastructure growth in greater western Sydney.

Also celebrating the announcement was the Western Sydney Leadership Dialogue.

“We commend the NSW Government for sticking with its promise to deliver this megaproject for the residents and businesses in Parramatta and Olympic Park, despite internal pressure to delay or cancel it,” Chairman Christopher Brown said.

An Environmental Impact Statement for the project will be released for public comment by the end of the year.

Other projects Infrastructure NSW recommends putting on the back burner include the M6 Motorway Stage 2, the central tunnel for the Great Western Highway Katoomba to Lithgow upgrade, any further major Sydney Metro or rail projects such as the CBD to Zetland and Western Sydney Airport lines, and the Dungowan and Wyangala dam projects.