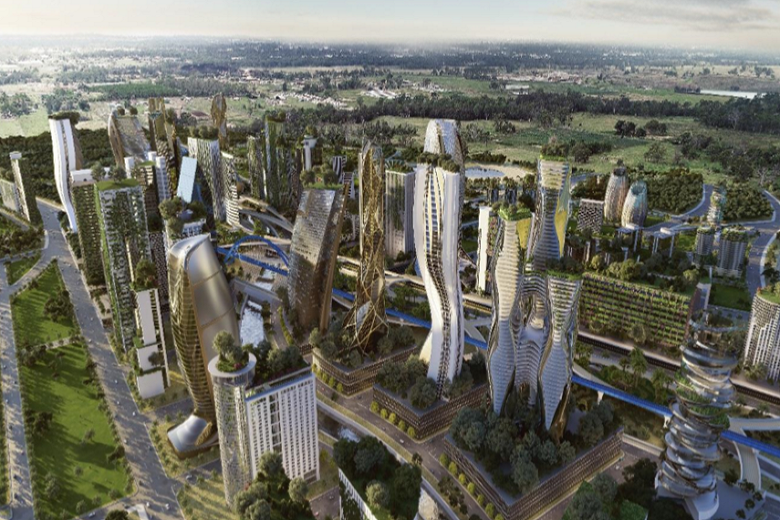 Sydney’s plan to create a metropolis of three cities is in danger of being thwarted by rapid population growth and a shortage of jobs if the state government doesn’t swing into action, a new report suggests.

The  Pulse of Greater Sydney report, released this month by the Greater Sydney Commission (GSC) suggests a divide between population and job growth and low rates of cycling and walking to work, could jeopardise plans to create a metropolis of three cities in Sydney where residents live 30 minutes from facilities.

The progress report canvasses the region’s performance against the commission’s 20-year plan to spread Sydney’s growth across three key areas and urges the state government to boost the number of jobs in the West and Central City districts to address an “imbalance” between population and the availability of work to achieve the three-city vision.

The plans, first touted by the Commission in 2018, envisage Sydney as a city of three key cities – one in the West, East and Centre – each with residents living half an hour from their jobs, education and health services, and outlines a 40-year vision to 2056.

The new report, which weighs up performance against the vision, measures five Sydney regions across three key goals from the original plan relating to jobs, education and housing, 30-minute city, walkable places and addressing urban heat.

It found most regions have substantially fewer jobs than their populations and facilities are largely not within 30 minutes of residents.

The availability of jobs is dwarfed by the size of the regions’ populations, according to the report, with Sydney’s west attracting just 16 per cent of the region’s jobs growth despite a 20 per cent population increase in the decade to 2016.

“This means the (Western City) district population increase has been far greater than jobs growth,” the report warns.

This divide between jobs and population growth is shared by other regions, with the North, Central City, East and South having fewer jobs than people.

“An increase in jobs, particularly knowledge jobs, and tertiary education opportunities in the Western City and Central City districts is needed to address the current imbalance, particularly as the population of these districts is growing at a faster rate than other districts,” the paper says.

Concerns about the government’s approach have also been raised by the Urban Taskforce, which has pointed to a lack of development in these regions and called for more high rise developments.

“The Urban Taskforce … (is) concerned that there seems to be a very suburban approach to Sydney’s character that is being promoted particularly in relation to local character. The best way to preserve local character is to ensure that most new development occurs in more urban locations in city centres and around railway stations,” it said in a statement on Monday.

Sydney also has a long way to go in creating three hubs where residents are 30 minutes from key services, the GSC report suggests, with most key services not currently within 30 minutes of residents.

Thirty-minute access to metro centres varies greatly in the 6-10am morning peak, the report found.

The East, Centre and West all had the largest rate of 30-minute access to key centres at 91 per cent, 68 and 67 per cent consecutively, and the South trailed behind with the least access at 24 per cent. 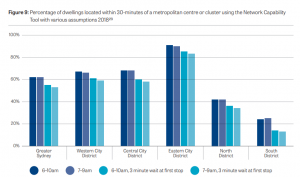 Rates of walking and cycling to work were also low across all districts but highest in the Eastern and Western City Districts.

In terms of education and housing, the report found the number of jobs and tertiary education opportunities are greatest in the Eastern City District while housing diversity is lowest in the Western City and Central City districts.

Sydney’s regions also have a way to go in boosting urban greenery, with all four regions affected by urban heat also having the lowest tree canopy cover.

The East, South and Greater Sydney all had the greatest percentage of residents with access to public open space at 77 per cent, 67 and 65 per cent consecutively.

The report comes just weeks after a researcher warned that Sydney’s 30-minute city vision is in danger of being derailed because of the centralised nature of population growth, a lack of housing and inadequate transport.

Shadow Minister for Western Sydney Greg Warren on Friday urged the State Government  to respond to the GSC report by balancing jobs growth across Western Sydney.

“This government is intent on dumping thousands of residents in Western Sydney but the Premier and her colleagues have no plan for the creation of local jobs,” he said.

“There are plenty of houses in Western Sydney but the unfortunate reality is that job opportunities are scarce.”

The paper urges the state government to increase the number of jobs and education opportunities in the West and Central City and to boost walking and cycling across localities.

More work is also required to further analyse the connectivity across Greater Sydney, the paper says.

The government should also be looking to boost urban tree canopy across regions.

The paper also provides an overview of the implementation of district plans in each region – plans which form part of the broader 30-minute city vision.

The Commission is required to regularly report on the progress of the plan.

The report comes as the Urban Taskforce released futuristic impressions of the three major cities planned for Sydney’s future.