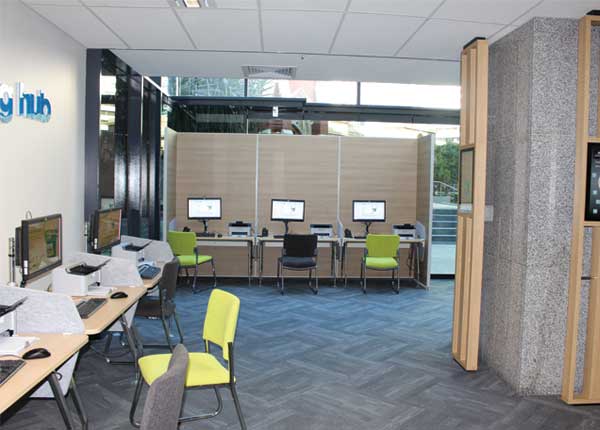 Hitting the mall to conduct online transactions with federal agencies like the Tax Office, Medicare and Centrelink might seem counter intuitive, but the Abbott government is clearly betting it can borrow a trick from high street banks to help convert computer-shy clients into tech savvy transactors.

As frontline service agencies across the country brace for massive of staff cuts contained in the Budget, Human Services Minister Senator Marise Payne and Finance Minister Senator Mathias Cormann have launched the first branch of a new hybrid one-stop-shop for government services in Brisbane to reduce costly over-the-counter business.

Billed as the ‘myGov’ shopfront, the new retail facility is a cross between a kiosk-style self-service centre and combined Human Services and Tax Office shopfront where customers can get hands-on help setting up their internet accounts for multiple federal services through a single online entry point.

The foray into bricks and mortar mimics the highly successful move by the likes of the Commonwealth Bank of Australia that now offer retail support to customers that might otherwise eschew the online enrollment process.

Banks across Australia have raked in big dollars by remodeling their branches into customer focused service ‘lounges’ which  have replaced ticket driven queues with concierges and cappuccino machines.

The payoff for banks is that they are able to secure more of a customer’s banking business by creating a user friendly environment that makes up-selling easy and effective.

Federal agencies have for more than a decade been under pressure to streamline their customer interactions by creating both physical and digital multi-agency shopfronts that save the need stand in multiple queues at multiple offices.

The myGov online entry point has been at the forefront of digital convergence efforts for several years as it gradually developed linkages between Centrelink, Medicare and Tax and as well as child support. However solid progress has been impeded by the myriad of complex technology architectures and security credentials need to keep transactions and highly sensitive data secure.

While Centrelink is widely regarded as a global leader in online service delivery, agencies including Medicare and Tax have proved more challenging to integrate until recently.

The new myGov hybrid government shopfront aims to change that perception and experience by allowing authorised staff to walk people through upgraded online facilities in a place where they would otherwise be doing business using paper.

“This new style of shopfront will focus on supporting people to use myGov in the first instance when completing their usual business with a range of government member services. This includes Medicare, Centrelink, Australian Taxation Office, Personally Controlled Electronic Health Record, Child Support, Department of Veterans’ Affairs and the National Disability Insurance Scheme,” Senator Payne said.

“There will be an app bar, self-service terminals and a learning pod to help people create a myGov account and use myGov so they can get things done online or from their mobile device, with the same convenience people enjoy when using online banking.”

A less celebrated advantage of the hybrid shopfronts is that they will allow staff to verify the identity details of customers on the spot while setting up accounts   a process that has proved a stubborn roadblock in the past.

Australia Post has already made a substantial foray to cash in on into the trusted identity business by providing outsourced verification services for the likes of the Passport Office as well as utilities and other services bound by what used to be known as the ‘100 points’ documentation test.

Treasurer Joe Hockey and Communications Minister Malcolm Turnbull have also conspicuously flagged that they want to see Post provide over the counter services for the likes of Human Services, a move that could dramatically reduce both staff headcount and the need for expensive real estate leases.

However critics have questioned the long-term wisdom of combining Post and Human Services counter functions given the often complex, sensitive and challenging needs of Centrelink and Medicare customers.

In the meantime, increasing numbers of welfare and tax staff could soon be standing on opposite end of the counter from where they once worked as massive job cuts hit.

The Community and Public Sector Union claims that Human Services has shed at nearly 5000* staff in the past 3-4 years, but has corrected a previous estimate it issued in a statement in September 2013 that put Human Services job losses 8000.

However Human Services has officially disputed the union’s calculations.

“I would like to correct claims the department has shed up to 8,000 staff over the past 3-4 years. This is not the case,” said Department of Human Services General Manager, Hank Jongen.

Since then, the Tax Office has indicated it will lose 3000 staff, while Australia Post has announced it will retrench 900 people from administrative roles, numbers that are over and Above the 16,500 federal job losses contained in the May federal Budget.

The story above has been changed to reflect new information provided to Government News by the Department of Human Services following a request for correction over staffing statistics cited in a media release by the Community and Public Sector Union that was issued in September 2013.

The initial reporting of the CPSU’s staffing estimate clearly attributed the disputed statistic to the union as the source of the information.  The CPSU has subsequently revised its estimate and advised that the initial incorrect statistic was the result of a typographical error.