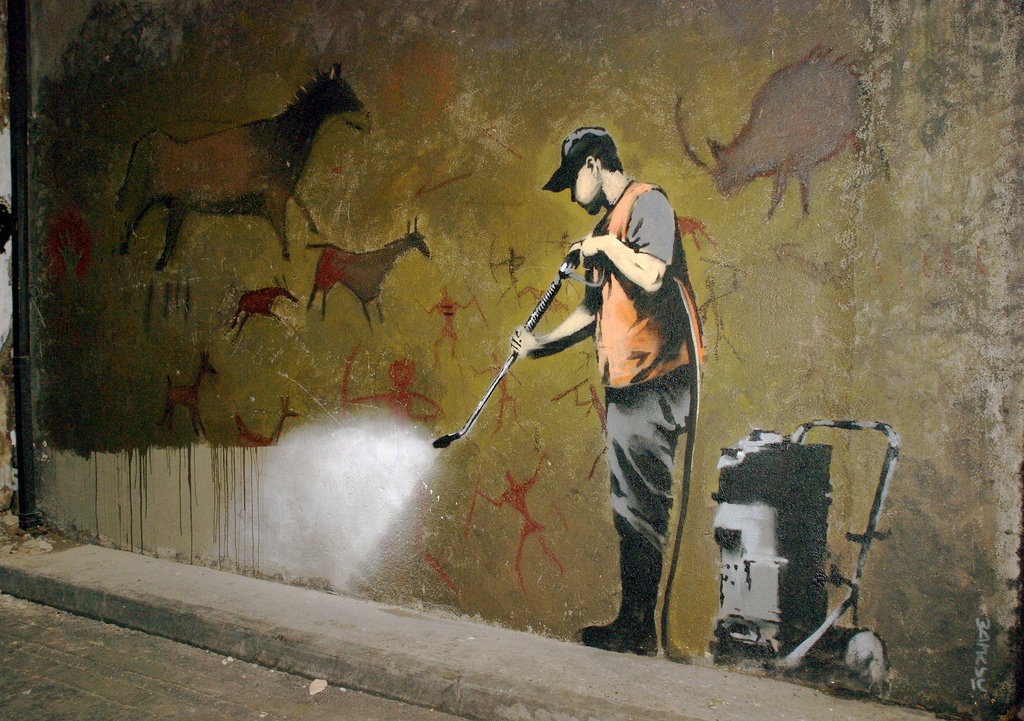 Walk down most urban streets, parks or laneways and it’s easy to get the impression of a gang infested, criminal hotspot thanks to the constant array of unwanted tags, squiggles and territorial markers left behind by vandalism posing as counter culture.

Whether you call it art or criminal damage, the markings that today festoon walls and public transport today have created dramatic changes in how areas are perceived, and not for the better.

For many in the community, tagging is a visual cue for a breakdown of social order and respect that ultimately threatens their property and safety. For its proponents, graffiti is not safe either with teenagers having been killed or injured by passing trains or falling from ledges.

The issue is a pressing one for local governments who struggle to maintain visual amenity and also providing a creative outlet for rebellious or disenfranchised youth which doesn’t involve use walls as the ideal canvass to leave paint-pen signatures.

While the problems are clear, understanding the drivers of tagging and graffiti is not because of the lack of research into the main motivations behind visual vandalism. The most common assumptions include the thrill-seeking pleasure associated with risk-taking behaviour by teenager. Another is unemployment and boredom. And even middle class kids get bored.

Another challenge that councils, police, courts and property owners have been forced to contend with for decades is that tagging and graffiti remains an under-reported crime – largely because of the bother involved in reporting, then cataloguing and finally removing it – followed by the risk that the perpetrators could strike again.

There are also issues distinguishing criminally motivated graffiti from privately or council sanctioned “urban art” –  commonly painted on outdoor walls in the hope of deterring vandals.

Yet even these are often vandalised raising the question as to whether such initiatives justify expenditure.

The Australian Institute of Criminology (AIC) has estimated in 2008 that the national annual cost of removing graffiti has totalled at $1.5 billion – an apparently “conservative” estimate because the sum is based on another figure that has been extrapolated from recorded crime data because graffiti and other forms of criminal damage are not always reported to police.

Coming up with solutions has been problematic for councils and authorities because of the deeper social issues that precede the incidence of graffiti, which have been known to include alienation from school, introduction to graffiti through friends and acquaintances, youth unemployment and the desires to fit-in.

The AIC has claimed that many of these “assumptions” about the backgrounds of vandals underpin graffiti management strategies.

But those assumptions could soon be tested.

A very notable development in reporting criminal activity that gives communities and authorities easier and more convenient methods of reporting graffiti has come courtesy of the now almost ubiquitous smartphone.

Not-for-profit organisation VandalTrak launched a GPS-enabled mobile app for Apple and Android in November 2012 that developers say has the ability to catalogue individual images of graffiti, recognise a common signature or style, and create a geographic profile of a single vandal’s graffiti activity.

Several councils in Sydney have already adopted the technology to their backend operations so that anyone who downloads the app to their smartphone can contribute to building a digital picture.

The app appears to be yielding results and its makers claim it has resulted in 40 offenders being “dealt with” by police through prosecution or youth conferencing under the NSW Youth Conferencing Act of 1997.

Conferences, where youth offenders front community members and victims, are seen as a viable deterrent to later offending and the eventual slide into criminality.

One pitch for VandalTrak is that powers a “doctrine of mobilising the community” because graffiti an underreported crime is made visible.
VandalTrak director of communications and research, Chris Winslow says there has been a surge of reporting now that people have a simpler means of doing it.

Easier reporting is also claimed to have created efficiencies for police  as previously they would have to go out in a patrol car, take a picture, come back to the station and file a report.

“Now, they just connect the information directly onto their desktop,” Mr Winslow says.

Mr Winslow believes the app addresses the problem of a perceived futility of in reporting. He says people previously didn’t know who to report vandalism and the police wouldn’t accept a report unless it was “your” property that was affected.

Graffiti as an “artform” comes in many shapes and sizes with terminology applied by proponents as to what it is intended to be.

Basic terms include “tags”, “bombs” and “pieces” (short for “masterpiece”). Tags are characterised prolific repetition of quick signature writing, whereas bombs and pieces encompass a more sustained and elaborate blitz of writing and drawing over a larger area.

But identifying unlawful graffiti versus “graffiti art” (or “urban art”) remains a problem for authorities because illegal and legal (through the consent of a property owner) forms are so often stylistically similar.

Sometimes large scale and extravagant pieces and murals that observers claim “enhances” the public space may be created without consent.

According to the AIC, this causes the line between graffiti and graffiti art to become blurred, creating the complex paradox of graffiti existing both an artistic pursuit and criminal undertaking.

Mr Winslow says although councils get money from the state governments on the basis that urban art will prevent tagging, he is sceptical about it because VandalTrak has received many images of murals that have been tagged   and areas around murals also attract more tagging by vandals

He questions whether state governments get value for money by funding artists to create murals likely to be vandalised anyway.
Mr Winslow says an artist who runs mural schemes in Lalor Park in NSW admits that her murals get tagged and the council gives her the paint to paint it over.

“They might as well have a blank wall and give her the white paint to paint it over and save a bit of money on the way,” Mr Winslow says.

The VandalTrak app has resulted in an increase in reporting due to its ease of use but according to Mr Winslow, this is because of years of graffiti going unreported.

After this sudden growth in graffiti reports from community members, the higher frequency of reports then creates difficulty in assessing whether an area has more graffiti than other areas that are not reporting as much.

Mr Winslow doesn’t consider this a problem. He claims it’s a sign that the problem is being solved because the numbers will “get worse before it gets better”.

“Initially graffiti has a legacy, it’s there until it’s removed,” Mr Winslow says.

He says after the adoption of the app, there will be a “tsunami” of reporting graffiti that’s existed for a long time. With subsequent reports of less frequent new graffiti, reporting subsides.

“Once people are reporting it religiously and removing it and collecting the data and prosecuting them, eventually these people will have nowhere else to go – they’ll be down in rail tunnels but they won’t be in parks and schools,” he says.