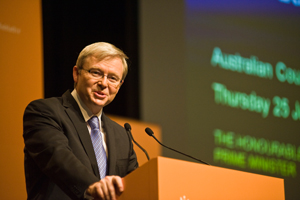 Prime Minister Kevin Rudd addresses the Australian Council of Local Government (ACLG) in Canberra.
By Rob O’Brien
Interest raised by this years’ Local Government Awards shows a growing need in the sector for more shared innovation through a centre of excellence.
In a sign that the Local Government Award Scheme has become a good way of exchanging and harvesting ideas within the sector, council initiatives from Newcastle City Council and Carpentaria Shire Council have been inundated with interest from colleagues and the media.

The two winners were announced by Minister for Infrastructure, Transport, Regional Development and Local Government Anthony Albanese at the second meeting of the Australian Council of Local Government (ACLG) at Parliament House last week.

Already more than 30 people from councils in Western Australia, New South Wales, Victoria, Queensland and Tasmania have signed up for a tailored two-day intensive learning program based on the success of Newcastle City Council’s ClimateCam, the world’s first greenhouse gas speedometer.

“Other councils are very keen to find out how they can use our ideas in their cities,” the council’s Environment & Climate Change Service Manager Peter Dormand said.

Programs run by the council have helped the Hunter region reduce electricity consumption by 36 per cent based on 1995 levels, and greenhouse gas emissions by 20.2 per cent below the projected 2008 targets set in 2001.

Dormand said that interest in community and business programs to reduce energy and water consumption has skyrocketed since ClimateCam was announced as the main winner of the Local Government Awards.

“ClimateCam for Councils is an opportunity to transfer knowledge to other communities, which is essential if we are to tackle the global issue of climate change.

“A fundamental aspect of the success of our programs is that they show people how they can live more sustainably, rather than just telling them what they should do.”

For a smaller council Carpentaria Shire Council’s initiative ‘Domestic Violence – It’s Not Our Game’, winner of a Local Government Award, has been a revelation in reducing violence through sponsoring the local rugby league side – Normanton Stingers.

Manager of Community Services for Carpentaria Shire Council, Anne Pleash, said the program worked because of its emphasis on community ownership.

“I think this works because it’s a fairly cheap initiative too,” she said. “The State Government in NSW has started rolling out the program with six football teams down there, but there’s no reason why those teams couldn’t work within the local government area they work in.”

Adopting the slogan ‘Domestic Violence – It’s Not Our Game’, Normanton league players feature in commercials which are run on Imparja Television during the football season. The team’s jerseys and supporters’ shirts also permanently display the slogan.

“The ads on TV have built up the profile of the project, but it also gives the players ownership – they’re on a public forum committing to what they’re going to do,” Ms Pleash said.

The project has garnered a series of state and national acolades and awards as well as national media coverage from the 7.30 Report, Marie Claire, and, most recently, The Footy Show.

“I think winning the awards and the opportunities that come with that have also helped,” Ms Pleash said. “For the boys the personal development makes them believe, and everyone behind the scenes is more motivated – because the hard work is being acknowledged.”

“It’s about encouraging innovation and when councils have been innovative, it’s about capturing that and promoting it and encouraging the take-up of innovation.

“That in essence is the key role of the centre.”

The winners of the National Local Government Awards were selected by an independent judging panel from 21 category winners.

More than 200 entries were submitted by councils and shires across Australia.