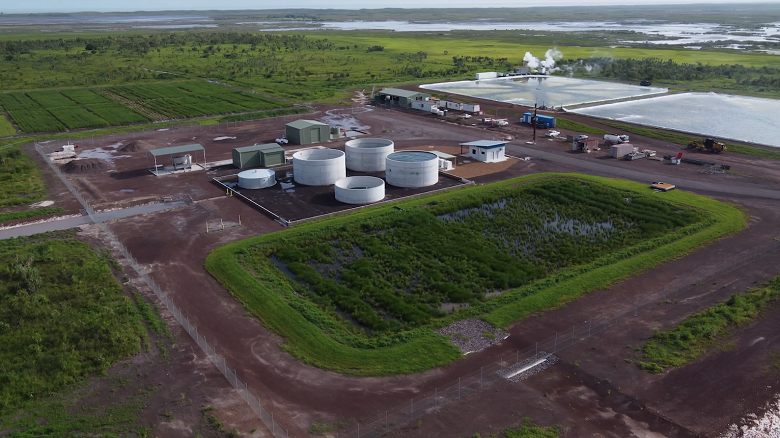 Darwin's new treatment plant will be capable of treating more than 50 megalitres of PFAS-contaminated leachate per year. (Image supplied by The Water and Carbon Group)

The City of Darwin had a problem with the wastewater generated from its landfill and a $13 million treatment plant is being built to address it.

The Shoal Bay Waste Management Facility had a problem with leachate, which is wastewater generated within a landfill through the decomposition of waste materials.

The Water and Carbon Group, a Brisbane-based environmental engineering company, worked with the City to develop a treatment plant project.

CEO Jim Hunter said leachate is from rainwater that falls on to open landfill or general waste out on the landfill.

“It filters through the waste and, through that process, it contaminates the rainwater and that rainwater is captured within the landfills, so you end up with this contaminated water,” he told Government News.

It then sits in the rubbish and becomes toxic to the environment, he said.

The $13.2 million Leachate Treatment Plant is currently being constructed in Darwin and expected to be completed in mid-2022.

Darwin’s new treatment plant will be capable of treating more than 50 megalitres of PFAS contaminated leachate per year . (Image supplied by The Water and Carbon Group)

It will be capable of treating more than 50 megalitres of PFAS-contaminated leachate per year through its new and innovative Low-Energy Evaporative Fractionation (LEEF) System.

“In the case of Darwin, where they have more rainfall than they do evaporation, they can’t get rid of it, and so it just builds and builds and builds.” – Jim Hunter, CEO of The Water and Carbon Group

The purpose of the facility is to enable the City of Darwin to continue to operate the landfill without fear of contaminating the surrounding environment, Mr Hunter said.

“The main features are that it incorporates a combination of treatment processes but, firstly, it’s a zero-discharge solution, so there’s no water actually leaving the site.

“It’s reasonably low use in energy, reusing the water for duo purposes, so that even though it’s wastewater, we’re able to treat it to a point that it can be utilised on site as an irrigation process.”

While working on plans for the treatment plant, Mr Hunter and his team discovered another problem.

“It was through that process that we discovered (the City) had this other contaminant that wasn’t known called PFAS,” Mr Hunter said.

Perfluoroalkyl and Polyfluoroalkyl Substances (PFAS) is a contaminant that doesn’t go away or degrade in the environment.

It is widely used to make various types of everyday products, to keep food from sticking to cookware and prevent clothes from staining.

“It’s toxic to the environment, and it bioaccumulates and it doesn’t degrade,” Mr Hunter said.

“So, we developed a system to separate out the PFAS component, which is actually a very tiny proportion of components or compound that’s within the leachate.

“It’s miniscule relative to all the other contaminants, so it’s very difficult to try and isolate and extract out.”

“(It’s) very important for councils to see that low energy use and circular economy protecting the environment for the community.” – Jim Hunter, CEO of The Water and Carbon Group

Benefits to other councils

This treatment system can be adapted for other councils, Mr Hunter said.

“Every leachate is different and every council’s surrounding environment is different, and the volumes of leachate they’re dealing with are different.

“But that allows them to actually adapt a system like this that combines the ecological processes with dealing with PFAS and and any other contaminants.”

He would like other councils to see the connection with the circular economy.

“(It’s) not just releasing water out into the environment that that wastewater is actually being utilised within the within the landfill,” he said.

“(It’s) very important for councils to see that low energy use and circular economy protecting the environment for the community.”

The project will also see an enhanced treatment wetland and a final stage involving an extensive vetiver grass irrigation system for evapotranspiration of the treated leachate.

The Water and Carbon Group and the City of Darwin will be commissioning the plant through the month of May through July, with operations to begin soon after that.

This article was updated on March 31st.