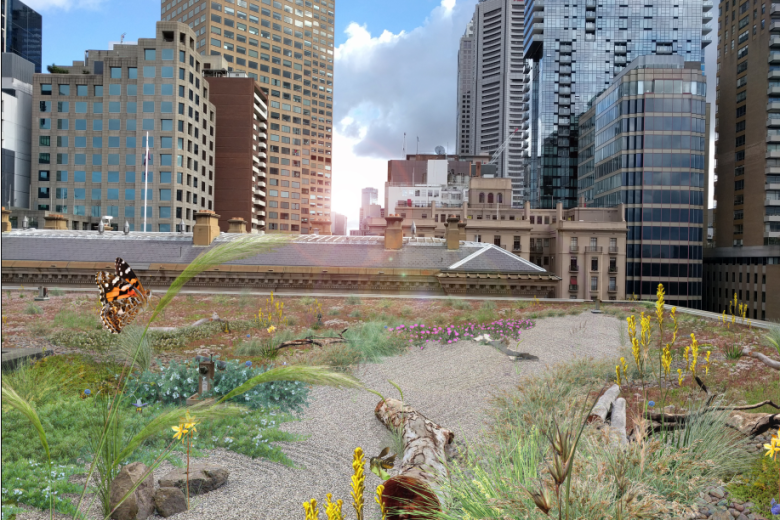 A rendering from council of how the green roof planned for One Treasury Place could look.

After announcing plans for a sky farm at Melbourne’s Docklands and committing $19 million to turn the city green, Melbourne has unveiled plans and funding for a ‘demonstration green roof’ on top of one of the city’s most eminent government buildings.

The city will create the demonstration roof atop the historic One Treasury Place building while funding research into the benefits of urban greening as part of a wider bid to adorn the city’s streetscapes and buildings with greenery.

The 1500-square metre green roof will act as a prototype to further research funded by council and the state government in partnership with Melbourne University and to inform broader planning for green infrastructure on new and existing buildings.

The move, which is a joint partnership between the Andrews Government and City of Melbourne Council, is aimed at lowering emissions and demonstrating the environmental benefits of establishing green roofs across the city.

Council and the Andrews Government will each fund the project with $1.25 million, with the project set to help with cooling, reducing energy cost and capturing storm water runoff.

Work is underway to develop a concept plan for the roof with construction set to comment early next year. It’s due for completion by mid-2020.

Minister for Energy, Environment and Climate Change Lily D’Ambrosio said the green roof will act as a prototype to help inspire other green roofs across the city.

“We want to lead by example, turning the roof of 1 Treasury Place into an urban green space, which will act as a prototype for owners, developers and industry when it comes to establishing a green roof.”

The move comes as part of a broader bid by council to boost the amount of greenery across the city, after council last month announced plans to increase the amount of greenery across the city as part of its Green Our City Strategic Action Plan and approved plans to transform a car park on top of a city building into a 2000-square-metre urban farm.

“There are currently around 40 green roofs covering five hectares in the City of Melbourne and while this is a great start, we want to see more and we know there’s lots of potential for our rooftops to be turned green,” he said.

“Rooftops across our city make up 880 hectares of space – more than five times the size of Melbourne’s largest park, Royal Park. Many of these rooftops retain heat across the city, thus exacerbating the urban heat island effect.

Cr Reece says recent mapping completed by council shows that “well over half” city’s buildings have “low or no constraints” to be converted into green roofs.

“About 75 per cent of land within the City of Melbourne is privately owned or managed, so there is huge potential for the private realm to contribute more towards greening our city,” he said.

The City’s existing Urban Forest Fund is a co-funding partnership between government and the private sector to boost greening across the city.

Cr Reece says that greening urban spaces is becoming increasingly common for some of the world’s biggest cities as they look to tackle climate change.

“We can learn a lot from across the world and there are many cities that do green roofs well,” he said.

“For example, in Toronto there are approximately 500 green roofs, big and small. In 2009, Toronto was the first city in North America to adopt a bylaw to require and govern the construction of green roofs. Germany is also a leader in green roof infrastructure, with Munich requiring green roofs on new buildings since 1996.”