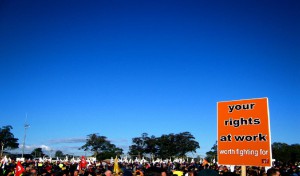 The Federal Opposition has pounced on the latest low-ball wage offer for tens of thousands of staff at Centrelink and Medicare, accusing the Abbott government of trying to use public service pay negotiations as a Trojan horse to relaunch a WorkChoices style industrial relations battle.

An effective resurrection of the WorkChoices spectre threatens to be another nightmare in the making for Prime Minister Abbott’s already embattled leadership because it has real potential to spook already jumpy voters fearful over job security.

“Since it took office 17 months ago, the Abbott Government has been urging employers everywhere to take on the their employees by offering real wage cuts, cuts to working conditions, longer hours of work and threats of job losses,” Senator Cameron said.

“With this offensive offer to DHS workers, it’s clear the Abbott Government is seeking to lead by example.”

However the offer is conditional on staff accepting marginally increased working hours that unions and the Opposition say add up to nearly an extra week a year at 4.5 days.

The deal is also entirely contingent on Human Services meeting targets for rank-and-file staff to executive ratios of 9:1 which is essentially beyond the control of the bulk of staff who stand to lose out if they are not met.

Human Services senior management yesterday revealed that if it cannot achieve the 9:1 ratio “a total general pay increase of 3.25 per cent over three years” will apply.

The big headache for the government is that no matter how the numbers are re-cut, the bolting-on of nearly a week’s extra work logically equates to a drop in ordinary hourly wage rates even after the incremental pay increases are factored in.

Jitters among Queensland and Victorian federal MPs already reeling from back-to-back single term election losses in their state elections are also unlikely to be soothed by the prosecution of hardball industrial tactics. Especially at the same time as mass redundancies of around 14,500 are taking effect across the federal public service.

The extent and vigour of the Newman government’s public service cuts in Queensland was punished heavily by voters who reversed one of the biggest majorities in Australian electoral history after just one term, returning a Labor government that had been expected to be in the political wilderness for a minimum of two terms.

Queensland was also a pivotal state in the 2007 federal election when unions and Labor successfully converted voter fears over job security and pay cuts into an election victory that was conspicuously assisted by an extensive union negative advertising campaign.

“Tony Abbott is using the public service as a vehicle to revive WorkChoices and it is completely unacceptable,” Senator Cameron and Mr O’Connor said.

“The latest wage offer to staff at the Department of Human Services demonstrates that unfairness and ideological obsession are at the heart of the Abbott Government’s approach to workplace relations.”

The pair also zeroed in on what they described as a “perverse” workplace bargaining, especially the curious redefinition of labour cost savings as productivity.

“Any talk of genuine attempts to increase productivity has disappeared from the Government’s agenda. It is now solely about crude service cuts and job losses,” Senator Cameron and Mr O’Connor said.

Both Senator Cameron and Mr O’Connor called on the government to abandon its present public sector workplace bargaining policy.

“There is nothing in the Abbott Government’s public sector workplace bargaining policy that even remotely approaches the sophistication needed to genuinely boost the productive capacity of the public service,” they said.

The office of Employment and Public Service Minister Senator Eric Abetz has been approached for comment.