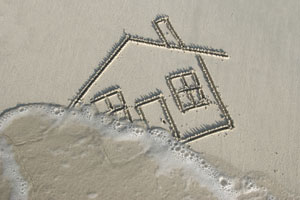 Communities across the east coast got a glimpse of what our coastline will look like in 50-years time, when they experienced yesterday’s king tide – the highest in 18-years.

The NSW Department of Environment and Climate Change (DECC), along with local councils and community groups, coordinated a photographic survey to provide a snapshot of coastal areas vulnerable to the effects of rising sea levels.

The DECC said the visual survey will raise awareness of the scale of environmental issues facing coastal communities.

"DECC and councils are aware of many areas across the state that are at risk, but there are sure to be many that they don’t know about," a DECC spokesperson said.

"The photographic coverage will hopefully give a state-wide snapshot of vulnerable areas, many of which will not have been recorded before.

"DECC will incorporate the images into a database and make good examples available on the DECC website for councils and others to help plan for the future."

A research scientist at the CSIRO’s Climate Adaptation National Research Flagship, Dr Kathy McInnes, said such observations can assist councils in planning for the effects of climate change.

“Photographing or recording the effect of the king tide on seawalls, jetties, coastal infrastructure and foreshore areas creates a helpful visual record for use in adaptation planning,” Dr McInnes said.

King tides naturally occur twice a year but the CSIRO has warned that their occurrence is likely to increase as sea levels continue to rise.

“By 2060 to 2070 we could be experiencing tides of at least this magnitude every month, rather than just twice a year due to climate-change induced sea level rise,” Dr McInnes said.

The Nature Conservation Council of NSW has criticised the Government for not having the appropriate policies in place to plan for reoccurring king tides.

NCC executive director, Cate Faehrmann, told ABC News that the NSW Government did not have a strategy to deal with “extreme levels of king tides and coastal erosion.”

The DECC spokesperson said king tides were important indicators of future projections in sea level rise, but it was only part of the State Government’s plan to help communities adapt to the impacts of climate change.

He said the DECC recently held state-wide workshops on planning for sea level rise and was currently compiling information for its Climate Change Action Plan which is due for release in June.

The DECC continues to provide advice and funds through the Coastal and Estuary Management Programs to coastal councils undertaking hazard assessments and on the ground works, the spokesperson added.