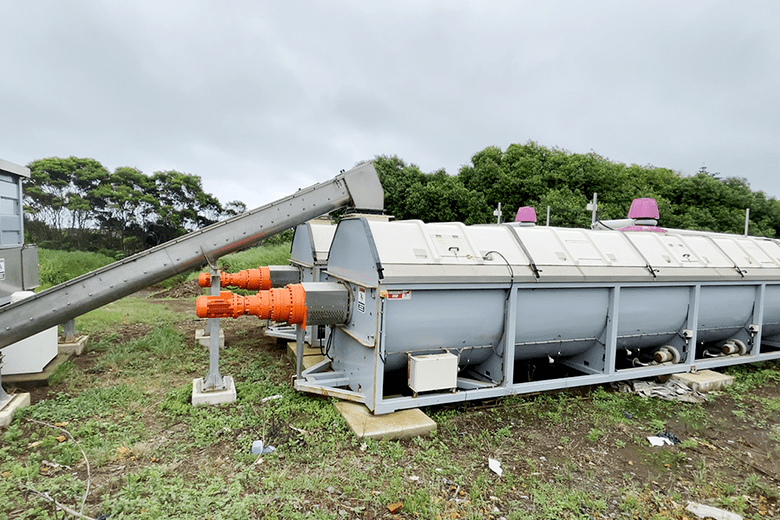 The 'HotRot' composting system turns organic waste into nutrient-rich compost that’s sold back to the community or used in Council parks and gardens.

Being located on a tiny parcel of land some 1,600 km from the Australian mainland doesn’t make life easy for a council trying to deal with waste management.

But Norfolk Island Regional Council is coming up with solutions that waste managers in remote communities would do well to take notice of.

The big issue for Norfolk Island when it comes to waste management is the tyranny of distance, says council’s manager of environment and planning Philip Reid.

Because of the unacceptable risk that a landfill site would present to groundwater, the island’s primary water resource, Norfolk Island’s domestic and commercial waste is currently exported to landfill or recycling factilities on the mainland.

A lack of sea freight options means the waste is flown out by air – a very expensive undertaking even with Commonwealth subsidies, at around $1,400 per tonne.

Previously, the traditional way of managing waste on the island has been to burn it using open air incineration, and push the residue out to sea.

But that process was phased out last November, largely to protect the island’s marine environment.

“We stopped it partly because we don’t want to do it anymore but also because the waters around Norfolk island are all now Commonwealth marine parks,” Mr Reid tells Government News.

So Council has decided to turn to compositing and circular economy initiaives instead.

The ‘HotRot’ system uses high temperatures to turn putrescible organic waste into nutrient-rich compost that’s sold back to the community or used in Council parks and gardens.

It’s has been operating on Norfolk Island since 2020 and now manages all organic waste generated on the island, including butcher’s waste, animal carcasses, food scraps, cardboard, paper, green waste and untreated timber.

The composting systems runs 24 hours a day and processes waste in a sealed system designed to eliminates methane gas.

Mr Reid says recent disruption to supplies and the current limited availability of freight ships has seen an increasing reliance on internet shopping among the island’s 2,000 residents.

“This has significantly increased the volume of packaging that is received at Council’s Waste Management Centre ,” he says.

Mr Reid says Council is continuing to evolve its waste management practices and is now focusing on ways of processing waste streams on Island to create recycled products and materials.

On one hand it drives down our export liability on the other hand it also means we’re getting some useable products out of it.

Council has recently entered into an agreement with Revolve your World, a small northern NSW-based waste management start up, to manage recyclable waste and turn it into products like glass and aggregate materials.

“What it means is that the majority of the waste on island, particularly the plastics we’re sending to landfill, will be recycled into reusable products here on island,” he says.

“That’s pretty exciting for us. On one hand it drives down our export liability on the other hand it also means we’re getting some useable products out of it.”

Council aims to have the system up and running by the end of the year.

Mr Reid believes the circular economy is the best solution for regional and remote communities that either don’t their own land fill or easy access to one nearby.

He also says now is good time for councils to take advantage of government initiatives targeting the circular economy, and Norfolk Island is hoping to hear some more with regards to this soon.

“With the national waste policy supporting a lot of initiatives for councils to get into circular economies it’s an opportunity for councils to really give things a go and test them out,’ he says.