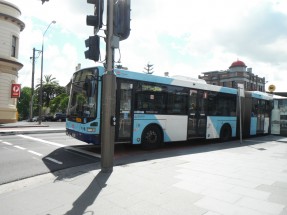 Trying to get onto a Sydney bus via the back door used to be regarded as a sneaky and dangerous way to try and dodge a fare that would get you thrown off.

But that could all be about to change after the New South Wales (NSW) government announced it will from this week start radical “All Door Bus Boarding” for passengers in Sydney’s CBD as Transport for NSW attempts to dramatically cut not only bus boarding times but also the frustrating congestion that long stops to take on passenger create across the groaning inner city roads.

It’s a move that could only have been made possible thanks to the highly successful introduction of the Opal public transport smartcard that now allows a fare to be taken at the rear doors because commuters can tag on there as well as tag off.

The long dwell times (the amount of time it takes to let all passengers on and off) of Sydney’s CBD busses have been causing traffic congestion headaches for decades because other services – as well taxis – are forced to wait until they can access crowded city stops, creating long lines that can reduce dedicated priority lanes to a crawl.

“Long boarding times at busy bus stops are having a knock-on effect for traffic right across the city, adding to the congestion nightmare,” NSW Transport Minister Mr Constance said.

“By reducing the time buses are stopped, journey times will reduce, reliability will improve and all traffic will get a smoother run through the city.”

One of the realities of peak hour in the city – aside from busses that are often frustratingly full by the time they hit Central – is that in the evening that vast majority of passengers at most stops are trying to get on a bus rather than get off.

The fact that until now just the front doors have been used for boarding means that busses have effectively only been using half of their onboarding capacity as passengers gradually and rather uncomfortably cram their way to less rear popular rear the bus.

The introduction of all door boarding could go a way to solving the all too familiar problem of drivers have to stand up and yell at standing passengers to move to the back of the bus to let new commuters on.

Most other forms of public transit, like trains and light rail, almost uniformly use all door boarding to more efficiently manage passenger loads.

In London, where high density double decker busses with all-door boarding have been the norm for more than a century.

A major reason for funnelling passengers through the front of the bus was the gradual elimination of bus conductors to collect fares, pushing the work instead onto drivers who obviously could not (safely) collect fares and drive at the same.

One known challenge off all-door boarding is safely allowing passengers trying to alight enough time to get off without being overwhelmed by passengers getting on.

That effect is likely to be the reason Transport for NSW is only allowing trials of boarding via rear doors where the combination of an Opal card and a special marshal are present.

Challenges notwithstanding, the NSW government clearly has high hopes for the congestion busting potential of it open door policy trials.

“We’ll be closely monitoring this trial and consider whether it can apply more broadly in the CBD,” Transport Minister Constance said.

“With an extra 1.6 million people expected to live and work in Sydney by 2031, we need to work now on practical solutions to accommodate this growth and that’s exactly what we’re doing.”

Locations for the all door boarding trials: