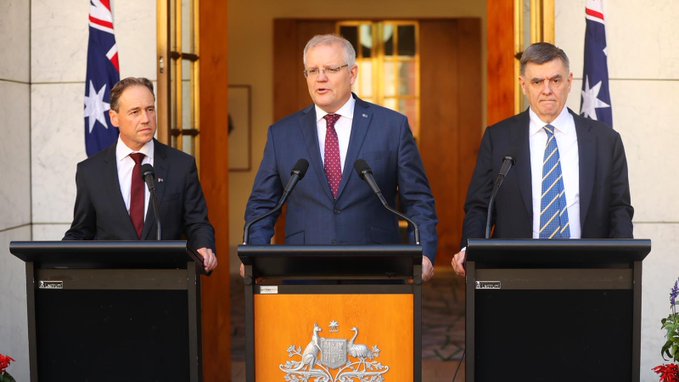 The federal government has announced a package of measures responding to the coronavirus outbreak.

The federal government has unveiled a suite of public health measures in response to coronavirus including the establishment of 100 ‘fever clinics’ through the country and the introduction of video consultations as a Medicare item.

Prime Minister Scott Morrison told a media conference on Wednesday that the government will allocate $2.4 billion to the national response with $1.2 billion to be spent this financial year.

“These will not be usual times and usual demands on the system. We expect there will be times when it will come under stress,” Mr Morrison told reporters.

The package includes $205 million for the bulk-billed pop-up clinics, $100 million for the aged care workforce and $30 million towards research including the development of vaccines and immunotherapies.

As well, $1 billion will go towards the national medical stockpile, an incident room and national workforce and communications measures.

“We are now working through the Primary Health Networks and identifying practices that wish to be part of this and we’ll be continuing to roll that out,” he said.

The government said there would also be funding for general practices that wanted to become dedicated respiratory clinics.

“The new package will substantially increase our capacity to test,” he said. “What we want to have is the capacity for people to get a test with essentially a same-day turnaround.”

Professor Murphy said Australia had managed to remain “behind the curve” of other countries in terms of the spread of COVID-19 and remained in the containment phase.

He said a period of sustained community transmission could last between eight weeks to four months. However the Prime Minister declined to provide details about the number of Australians who could be infected during a transmission peak.

The AMA has welcomed the measures saying they will go a significant way to reducing the movement and spread in the community of the virus.

National president Tony Bartone said the AMA is working with the government to identify the location of pop up clinics.

“These facilities will have to be distributed through the community and based on the population and resource needs, so we don’t have three next door to each other,” he told the ABC.

Meanwhile Government News has obtained a letter to the prime minister from Brisbane-based GP decrying the government’s “abysmal response  and the lack of preparedness” for the outbreak.

“It has been poorly managed from the outset and now at the two month mark, mixed messages, confusion and panic has set in and still there is an abject lack of effective leadership from you and your government,” the doctor writes.

“The fact that it is a coronavirus outbreak is almost irrelevant as pandemic preparedness and systems should be in place regardless of the nature of the threat and this is clearly not the case.”

The doctor says since the first death was reported in China in January there has been a lack of co-ordinated response and conflicting advice given to doctors, especially those in the frontline like GPs and emergency doctors.

She says mixed messages and lack of clarity from the government has led some GPs to self-isolate earlier than possibly required, which along with delays in getting protective equipment is affecting the workforce.

“The public and the medical community deserve a single, informed point of contact providing regular updates and advice based on the best available medical evidence,” the GP says.

The identity of the GP is known to Government News however we have agreed to withhold it because she expressed concerns that any repercussions could impact on her ability to continue to serve the community.

2 thoughts on “Fever clinics and telehealth in national coronavirus response”