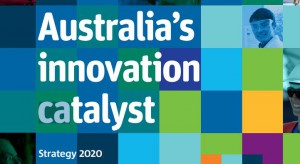 In the wake of savage Federal Government cutbacks Australia’s premier science research organisation has announced an ambitious new program designed to “to improve Australia’s record in innovation and help the country respond to global changes and digital disruption.”

In its strategy for 2015 to 2020, called ‘Australia’s Innovation Catalyst’, CSIRO outlines how it intends to become a global collaboration hub and help boost Australia’s innovation performance.

The strategy document can be downloaded here

“Australia currently ranks 81st in the world when it comes to innovation efficiency – the bang for our buck we get when we transform innovation investment into results,” said CSIRO Chief Executive Dr Larry Marshall. “If that was a team sport ranking, we’d be outraged. As a country, we need to work together to improve this result.

“Australia’s prosperity, health and sustainability is closely bound to our capacity for innovation – and CSIRO has a key role to play here.”

What Dr Marshall did not talk about in his announcement was the extent to which CSIRO’s funding has been cut by the Federal Government in last year. $110 million was taken out of CSIRO’s funding in the 2014 budget, following previous cuts, which have reduced staffing levels by 900, or 20 per cent.

But onward and upward. “CSIRO is Australia’s largest patent holder. We’re the people behind fast Wi-Fi, part of the global team which developed extended-wear contact lenses, designer polymers using RAFT technology and the Hendra vaccine – but this is the tip of the iceberg when it comes to the value we offer the Australian people.”

In a novel approach for the 90-year-old science body, it crowdsourced ideas and suggestions from more than 7000 people, including its staff, research partners and other collaborators, and the public to help determine the direction of the strategy.

“For CSIRO the question is really, what does Australia need?” Dr Marshall said. “The crowdsourcing helped answer this question by asking people to consider a range of challenges and opportunities ahead and asking how we should respond.”

Dr Marshall said the strategy represents a new era for the national science agency. “At its core is the need for CSIRO to be a catalyst for change and growth in the innovation system in Australia. Innovation is a team sport.

“We need to form new bonds and collaborate across disciplines, sectors, science and business. That is where profound innovation happens – at the intersection of these areas.

“We must also be asking who our customers are and if we’re creating the value that they need. We work with businesses, industry, governments and communities and we need to find ways to benefit every Australian.”

He said one of the greatest challenges for Australia has been the difficult road for inventions and technology to go from an idea to then being in the hands of the public.

“To help, we have formed the CSIRO ON program – an initiative to fast track CSIRO technology and ideas into the market and to get it into people’s hands more quickly,” Dr Marshall said. “This is what we call ‘breakthrough innovation’ where we will help reinvent existing industries and create new ones.”

Dr Marshall said part of the push for greater collaboration and co-ordination by CSIRO will be increased co-location with universities and other research organisations and a greater emphasis on international connections.