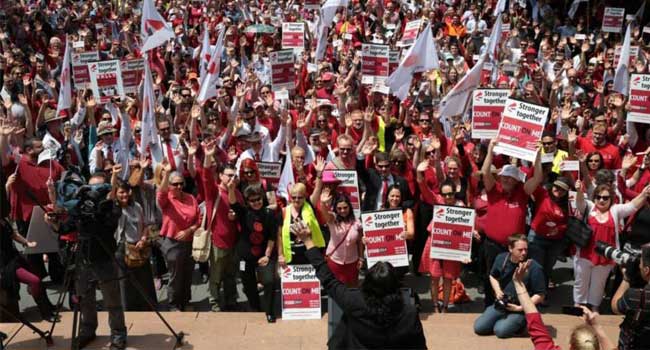 Federal servants have turned out in force in Canberra to protest against the Abbott government’s attempts to foist below inflation wage deals and heavily diluted workplace conditions as the clock counts down towards industrial action across multiple agencies.

The Community and Public Sector Union says that more than 2000 members turned up to a lunchtime in Canberra’s city centre to publicly reject the present round of deals being to around 165,000 public sector employees.

The public protest comes as the CPSU escalates its pressure on Employment Minister and Public Service Senator Eric Abetz to give ground on the pay negotiations before what is expected to be ongoing industrial action aimed at public service bosses and the government hits.

CPSU National Secretary Nadine Flood used the rally to accuse Senator Abetz of refusing to talk or negotiate a compromise with the union. 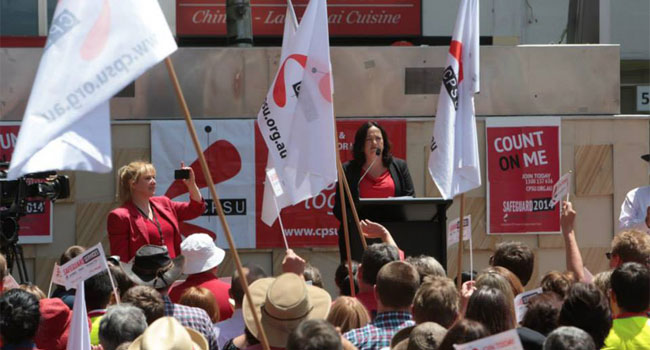 “We have said we will talk,” Ms Flood said. They are not interested. Minister Abetz has 165,000 employees in bargaining with not a single agreement having been reached, not a single agency able to put something acceptable to workers.

“He refuses to acknowledge there is a problem, he refuses to sit down and meet and discuss bargaining with the CPSU. That is extraordinary.”

However with protected industrial action ballots now underway at the massive Department of Human Services and the highly sensitive Department of Veterans’ Affairs, the union is going out of its way to reassure welfare recipients they will not become collateral damage in the dispute.

“Our actions are designed to put pressure on departments and agency management and the Government but not to hit our community and not to hit our low-paid members who can’t afford to be out on a picket line for weeks,” Ms Flood said.

“Right now members in DHS are voting on industrial action, members in DVA are starting the process and in coming weeks and months we expect other agencies to get to that point.”

The CPSU is well versed at running length, slow burn campaigns that slowly grind away at management and ministers and Ms Flood strongly indicated long haul tactics were on the table. 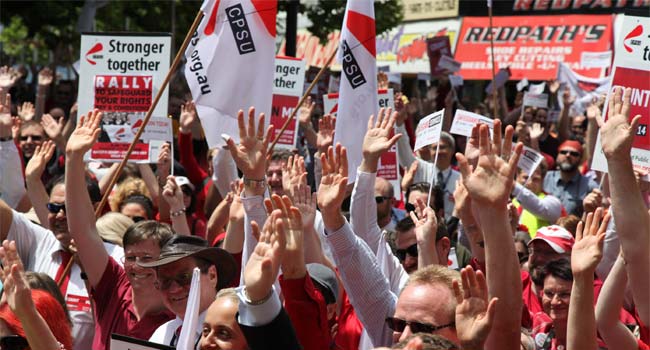 “This will not be a short, sharp industrial campaign. We are prepared to dig in, if necessary,” Ms Flood said.

The union is also claiming success in attracting new members because of the government’s hardline approach to bargaining.

Ms Flood said more than 5500 people had joined the CPSU since the Budget which had strengthened the union’s position in “big, tough, complicated fights”.

Some of that strength will be financial as 16,500 public servants are jettisoned from the ranks of the bureaucracy.

While there is little doubt the Abbott government is seeking to substantially limit the influence of unions in the public sector, the culmination of big job cuts and a three year workplace bargaining has provided a potent recruiting tool that could set back industrial reform ambitions by years.

Some inside the Coalition are known to be uneasy with how public sector reform is being handled, especially after the fierce backlash against Newman government’s big job cuts.

The rub for the Abbott government is that with the job cuts out of the way, public servants have little or nothing to lose by holding out because further substantial cuts would likely impair the functioning of the bureaucracy.

“We are prepared to sit down and thrash this out at the bargaining table but this Government won’t talk.”