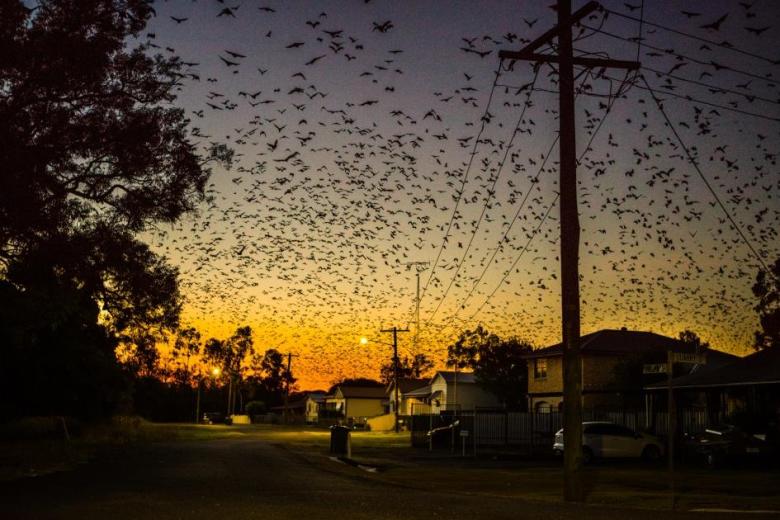 Flying-foxes, like these seen in Bathurst, are causing issues across NSW. Photo: Jamie Gilmore @StudioDC3

Rapidly growing flying-fox colonies in urban areas are causing grief for councils across NSW but state support for long-term resettlement of habitats could offer a solution.

In Tamworth, in the New England region of northern NSW, the local flying-fox population reached more than 140,000 at the end of last year, according to Tamworth Regional Council.

This has had a significant impact on the community with residents complaining about the noise and smell as well as biodiversity and business impacts, says Craig Cox, spokesperson of the Flying Fox Action Committee Tamworth (FFACT).

Just this month, a petition by the FFACT to have the flying-foxes’ endangered status challenged in parliament garnered 3,000 signatures. The group hopes the change would enable councils and residents to move the flying-fox camps through “practical but non-lethal means,” such as sound aversion.

Under the current legislation, councils’ hands are tied with the animal’s status as endangered preventing their relocation, Mr Cox said.

“Council have done what they’re allowed to do under the camp management program released by the State Government, which involves subsidies to allow residents to purchase covers, that’s about it. They really don’t have a lot of powers in this one,” he said.

The issue has been challenging local governments across the state.

Last week, the Country Women’s Association of NSW agreed to put forward a motion on the issue at the NSW Nationals annual conference in June.

This comes after a successful motion at the Local Government NSW conference late last year between Inverell, Nambucca and Tamworth councils to have camps within 500 meters of residents and public facilities relocated.

Further south, Central Coast Council has called for a more holistic approach to flying-fox management in which councils are encouraged to collaborate on the issues.

The council opened its first strategy on managing the flying-fox population for public exhibition last month.

Mike Dowling, the council’s director of assets, infrastructure and business, said a key part of the council’s strategy is an awareness campaign to educate residents on the important role the animals have in the dispersal of native plants.

“It is about ensuring the protection of these species with a strategy that proactively addresses the lack of understanding and potential conflicts in our urban areas,” Mr Dowling told Government News.

Last month the State Government and the Local Government Association of NSW announced a partnership that will provide $5 million to assist councils to find long-term solutions to resettle the mammals.

Linda Scott, LGNSW president says that managing the rapidly growing flying-fox populations is a challenge for all councils and she hopes the funding will power a long-term solution.

“Some councils have already developed camp management plans to manage the impact of colonies on communities but this new funding will allow that work to be taken to the next level – establishing or enhancing camps in places that minimise conflict with humans.”

While 2015 data from the CSIRO indicates that the flying-fox population in NSW declined by more than 60 per cent over 10 years, the population  is rapidly migrating to urban areas, experts believe due to food scarcity and seasonal variations.

The funding from the State Government will be made available over 10 years for projects that protect flying-foxes whilst minimising their disruptive impact.

The first phase will test a model to predict flying-fox habitats, followed by mapping and identification of potential sites where foraging habitats could be created. The second phase will test whether flying-foxes move to newly created habitats and the factors involved.

Mr Cox said the funding is welcome news and that Tamworth will be putting its hand up to be part of the flying-fox camp study.

Meanwhile, the State Government is currently conducting a review of the NSW code managing the distribution of licenses to flying-fox camps, with submissions closing at the end of the month.