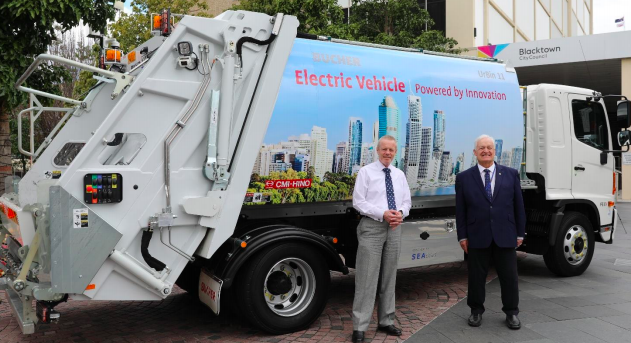 It creates 17 per cent of the carbon dioxide emissions that a similar diesel truck would produce, Mayor Tony Bleasdale says.

Cr Bleasdale says use of an electric truck is in line with targets set by Council’s earlier this year, to achieve zero net emissions by 2030 for operational electricity, fuel and gas use.

Council is also in the process of doubling its rooftop solar energy generation and has a target of 100 renewable electricity use for our operations by 2025.

“It makes the electric garbage truck a perfect fit for our strategy” Cr Bleasdale said.

“So far, our drivers have all been impressed with the quietness and ease of operation of the truck.”

The truck also means the streets are quieter and more peaceful for residents, Cr Bleasedale said.

He says councils plans to add more electric and alternate fuel vehicles to its fleet in the near future.

It comes after City of Sydney announced in March that it was trialling its first electric truck.

“We have been testing whether the quiet trucks would fit through our laneways and perform as efficiently as diesel vehicles – so that one day soon, our garbage truck fleet can also be emissions free,” Lord Mayor Clover Moore said on Facebook.

Sutherland Shire Council also agreed last year to a range of initiatives to electrify its fleet, including the introduction of four Hyundaai Ioniq electric vehicles into its car pool fleet and trials of a fully electric garbage truck and electric compact sweeper.

The first fully electric rubbish trucks hit Australian streets last May in the City of Casey, and in January the City announced several new electric trucks had joined the fleet at WM Waste Management as part of a new waste contract.

The trucks are powered solely by battery power and can operate five hours before needing to be recharged.

“Electric trucks are a key demonstration of our support for renewable energy as they significantly reduce our environmental footprint and improve the sustainability of residential hard waste collection,” he said in a statement.

Each electric truckload of waste will save approximately 180 kg of carbon dioxide from the atmosphere when operational as compared with an equivalent diesel truck, WM says.

WM says it hopes to move to more battery-powered vehicles in the future.