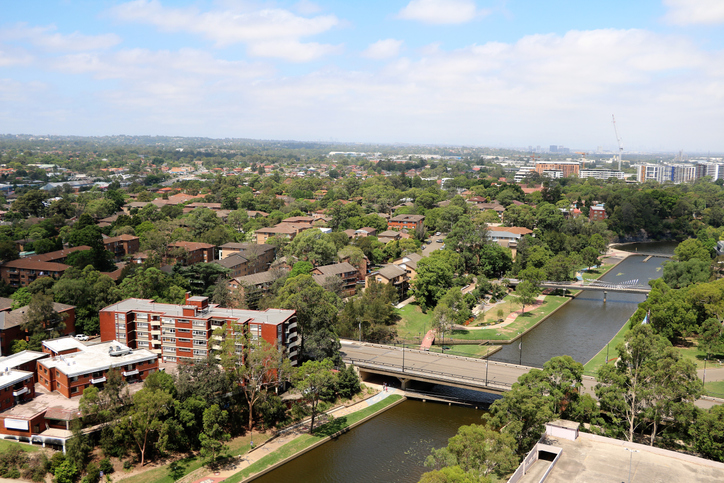 A new report is calling for radical changes to transform the suburbs on the edge of Sydney's west.

Sydney suburbs stretching from Castle Hill to Hurstville would become the “jewel at the centre” of the city under a bold new plan to revitalise the region with a City Deal, an alliance of councils and the leadership of a new minister.

Councils from the Hills in the north, through Parramatta, Westmead and Sydney Olympic Park, down to Hurstville via Canterbury Bankstown in Sydney would form a new planning alliance while the state would appoint a dedicated minister as part of a new plan touted by leaders on Thursday.

The paper, from the Western Sydney Leadership Dialogue, calls for a $20 billion Western-Sydney-style City Deal for the region alongside a massive infrastructure splash from the state to stimulate growth in the area.

Despite being home to 29 per cent of Greater Sydney’s population – a figure set to blow out to 33 per cent by 2036, the paper warns that the region risks becoming an “afterthought” caught between the Greater Sydney Commission’s three cities vision.

“There is no metropolis of three cities without a functional core,” the paper says.

“The central city risks being stuck in the middle – sandwiched between the historic focus of the established eats and the emerging greater west. Central Sydney needs its champions, its own identity and projects of national significance. The central city should not be an afterthought, but rather a focus are in its own right.”

The paper advocates for a string of new infrastructure projects in the region and the clean-up of a network of rivers including Parramatta River, Cooks River and Georges River by local councils.

The plan would be supported by a planning partnership between councils, a co-ordinator general at the state level and the creation of an urban think tank for the area, the paper says.

The alliance would bring together councils from across the region under the leadership of a chief co-ordinator, who would oversee the delivery of the City Deal and collaborate with government and industry to review funding arrangements and advocate solutions.

Planning Minister Rob Stokes on Thursday told an audience of more than 100 stakeholders that a governance shake-up was “critical” to the plan’s vision – which could be supported by a dedicated minister.

“Certainly we do need to look at partnerships. Collaboration models are the way city governance works best. We need for a tension that involves everyone. Infrastructure financing models way to do that and we’re very open to doing that,” he said.

Dialogue Chairman Christopher Brown AM said that collaboration between councils and the state and federal government formed the cornerstone of the plan , alongside the City Deal which would spark private sector investment.

“If we want our heart to continue to pump, and reach its potential, we need to unblock its arteries. This includes strategies aimed at revitalising the region’s rivers and renewing town centres along Parramatta Road, improving the way our council areas collaborate and investing in stronger north-south connectivity,” he said.

Luke Turner, director, Policy & Analysis at Western Sydney Leadership Dialogue said that a coordinated governance deal bringing councils together was the backbone of the deal.

“We need to get all councils on board and in the same room,” he said.

The Federal Government’s $5 billion contribution to the Metro West or Sydney’s ‘steel spine’ should form the foundations of the new deal and infrastructure projects in the region, the paper says.

The relocation of SBS office in the North Shore, public access to Lancer Barracks and a liveability Fund are among the key measures put forward to help the region grow.

With the State Government already having a massive stake in the region, the paper argues there is a strong case for more targeted investment, warning that “failure to grasp this opportunity will cost Sydney, NSW and the Australian economy.”

The paper calls on the state government to appoint the chief co-ordinator for the region and a minister for the city while nominating Parramatta as a hub for a fast inter-city rail.

Meanwhile, councils should not only build a planning partnership but drive engagement with communities to prioritise urban development but to repair the sullied river system, the paper says.

The plan has the potential to transform the region, Mr Stokes said, potentially strengthening the city and balancing out the population squeeze.

“With that together with partners from local and federal government we are going to have a very bright future for a central city not stuck in the middle but rather the jewel at the center.”