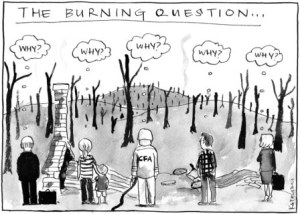 Issues including the management of fire refuges and the  emergency management policies of local government have faced the white heat of the inquiry into the February 7 bushfires.
Municipal Association of Victoria (MAV) CEO Rob Spence was grilled by the Victorian Bushfire Commission on emergency planning laws including the liability of local government in providing communities with refuges from fire threats.
Citing policy positions that changed following the recommendations made in the Miller report into the Ash Wednesday fires of 1982, the Commission probed Spence on fire refuges.
In a series of tense exchanges Spence was forced to defend local government policy and said that refuges had become a legal nightmare for local government with costs of upkeep too burdensome.
“The capacity of councils and the communities to establish the number of facilities that would be required to provide the level of protection is incredibly onerous,” Spence told the Commission.

“To have them meet the standards that have been specified, which are incredibly onerous, is I think the primary issue.

“The risk to councils in the model of refuges in designated refuges is that, if an incident occurred and a number of people were killed or injured in one of those facilities, then the council has basically an exposure that we were trying to
remove.”

The Commission has heard evidence that on February 7 people fleeing the bushfires, which killed 173 people and destroyed 2000 homes, congregated in public areas such as schools, pubs and ovals.

Refuges have long been abandoned by local government over the legal issues that would make them liable for those people sheltering from fires.
Spence told the Commmission that as local government was treated as a service provider by the State Government, they faced greater legal exposure over refuges.
He said the MAV had suggested legal indemnity for local government in the provision of refuges in 2000, but this was rejected by the State Government on the grounds that the government did not indemnify service providers.
“The councils are endeavouring to weigh up the risk to their community of legal action over a failure and what that’s going to cost the community relative to having the indemnity," Spence said.

"I think it was a pretty mean-spirited response from the State."

The Commission also heard that emergency management plans including the location of refuges were not properly communicated to threatened communities.
The hearing into the Black Saturday bushfires continues.