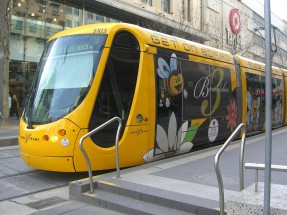 Any commuter that’s lost their wallet or left their umbrella behind on a bus, train or taxi and then tried to find it will attest to the daunting challenge of trying to retrieve an item from the disconnected maze of lost property offices that help keep auction houses in business.

But the annual GovHack innovation and coding festival that throws the public sector’s vast repositories of data might just have bowled-up an idea that uses a blend of crowd sourced civic duty and web smarts that could bring a smile to the face of losers all over the Australia.

It’s called LOST FOUND and is essentially a platform agnostic web app that uses goodwill and data to match a seeker, a finder and a service provider or other organisation to which stuff gets handed in.

By LOST FOUND’s reckoning and some public transport numbers more than 15,000 items are lost on Victoria’s public transport system alone each year, a figure likely to be broadly and proportionally similar in other cities.

A lot of that stuff winds up in the rubbish or at clearance auctions because most people simply know it’s pretty long odds you’ll get your stuff back because it’s simply too hard to find.

Of course a lost item’s value is far more relative and elastic than what it may have cost in dollar terms.

So if you think that taking care of your own personal property while on the move is just a responsibility needs to be learned, spare a thought for the millions of parents each year that alight from public transport to feel the terror that their child’s favourite bear/toy/rug/device has been left on a seat or the floor and will likely never be seen again.

“Can’t you call the bus driver?”

Should the kind-hearted developers of LOST FOUND, who’ve dubbed themselves ‘Boo Hiss’, get their way, there could be a cheap, social and realistic solution to actively combat the emotional upheaval that Government News likes to call ‘losers remorse’.

One of the reasons we really like this idea is because it’s not just simple, it actually encourages people to do the right thing by giving them a means to connect lost items handed-in … and that includes people working for transport authorities or other services that have lost property functions but actually have better things to do.

According to LOST FOUND’s pitch, at Yarra Trams “items handed in to staff are catalogued and entered into a central computer database, a tedious and labour intensive process. Even with these procedures in place, the process of retrieving a lost property is not an easy one for commuter,” they say.

“A commuter [has] to call up the Yarra Tram Customer Feedback to find out if the lost item has been handed in. If a matching item has indeed been handed to a staff member, the commuter will be provided with contact details for the relevant depot.”

Now if the lost item could be digitally matched thanks to a finder quickly and easily logging in their discovery, that could very much change the complexion of things.

The interesting question now is whether transport services — both public and private — as well as other public places will be willing to tool up and trial the idea, which of course needs some money to get moving.

You’d hope that raising the cash should not be an insurmountable task, especially if the loser is willing to pay a voluntary fee – either nominal or value based — on successful retrieval.

For example a teddy bear has no monetary resale value but its loss carries a massive emotional toll for child and guardian alike. Parents would happily stump-up not just a modest an admin fee ($5?) but would also likely pay for a courier to home deliver it back before bedtime.

It’s also not hard to envisage people shelling out $20 to retrieve smartphones, wallets, car keys, prescription glasses or other items with a high replacement value or major inconvenience factor.

An obvious potential backer of these sorts of schemes are insurers and banks that potentially stand to benefit by not having to pay on claims or reissue credit and debit cards.

There’s also the potential for some much needed transparency in areas where the incentives to hand back lost property might be less than in others — dare we say taxis, public spaces and some entertainment venues where patrons are more relaxed than usual.