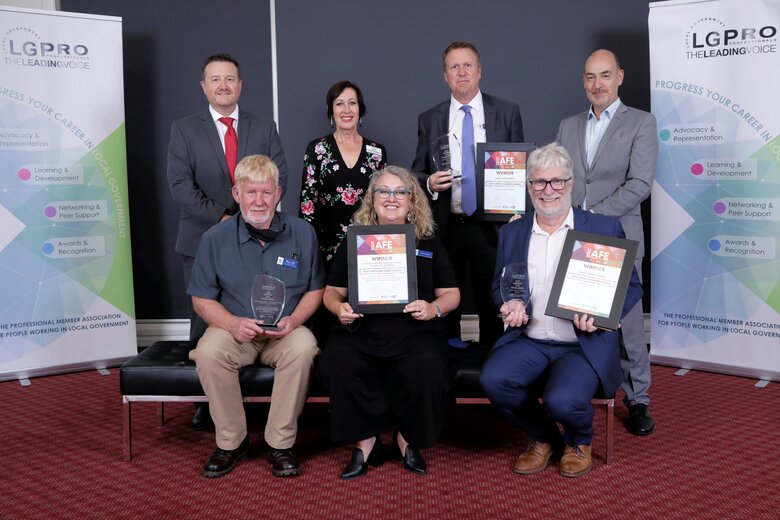 Winners at the 2021 LGPro Awards for Excellence.

An innovative council project to turn a decommissioned landfill site into a family park and urban bushland has been recognised with an award from the state’s peak body for local government professionals.

It was one of three awards East Gippsland Shire Council took home from the 2021 LGPro Awards for Excellence which were streamed  on Thursday, and which also showcased projects ranging from the development of a world class BMX facility to a film about coming out as transgender.

East Gippsland took out the award for Community Assets and Infrastructure Initiatives for projects valued over $2.5 million for the landfill project, the first in the state to use a process known as “phytocapping”.

The judges said Council was able to turn the site into a community asset and create the Bosworth Road Recreation Area, including walking trails, a mountain bike track, off-leash areas and wetland observation decks using the method.

Phytocapping uses trees and other vegetation as a natural ‘pump’ to prevent rain leaching into groundwater and nearby waterways.

“The Shire council has shown that this new method, phytocapping, is a technology with great promise for local government,” the judges said.

“We’re really proud to be able to turn this into a family park and urban forest, and use trees rather than a clay cap to make it into a really wonderful place for our children” General Manager Assets and Environment Fiona Weigall said.

In the Service Delivery category, East Gippsland was awarded the top gong for its mobile recovery service which delivered services to 48 bushfire-hit locations across the shire over ten weeks from January 13, 2020.

Other award winning projects recognised in the awards included the development of BMX facility by Greater Shepparton that last year attracted a World Cup event, and a short film titled Mask about young person struggling to come out as transgender produced by Knox City Council which has had more than 1.7 million views on YouTube.

“East Gippsland’s achievement of three awards was particularly impressive considering they were dealing with the impact of devastating bushfires last year,” she said.

COMMUNITY PARTNERSHIPS INITIATIVE
Moreland City Council, Count Me In Too