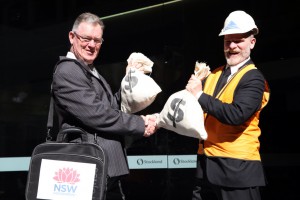 The Mike Baird government in New South Wales has vowed to rush through special new legislation to protect previous findings of corruption made by the state’s Independent Commission Against Corruption (ICAC) to head off legal action by targets named and shamed by the watchdog.

The promise to pass new laws, which are likely to have to be applied retrospectively, follows a High Court decision that the ICAC over-reached its powers when it pursued Margaret Cunneen, the state’s deputy senior crown prosecutor.

The standing of ICAC’s pervious and future findings had been thrown into question by the High Court decision that went to the extent of what ICAC could probe and the legal definition of corrupt conduct.

After bringing down a long list of high profile political and industry figures over illegal donations and graft — most famously Labor right faction powerbroker Eddie Obeid — the ICAC has enjoyed widespread public support for flushing out public malfeasance, but remains reviled by some of those targeted who are legally well resourced.

The Baird government’s action on how to remedy ICAC’s legal limbo is seen as a key test of the Premier’s resolve to directly take elements of his own party that have been bitten by the corruption watchdog. Before the last election there were around 10 government members sent packing to the cross benches over questionable governance and conduct.

The ICAC also played a prominent, albeit indirect role in Mr Baird’s ascension to the state’s top job after former Premier Barry O’Farrell resigned after giving conflicting evidence over a bottle of Grange Hermitage he received as a gift.

On Tuesday morning Premier Baird was unequivocal about ICAC’s role and the need for it to survive.

“While the High Court’s recent decision raises important questions about the ICAC’s jurisdiction for the future, it should not provide those who have done the wrong thing in the past with a loophole. We need a strong ICAC, and we will have one.”

But while previous findings will stand, the watchdog’s sweeping powers have been sent to a widely anticipated review run by an expert panel that the Premier has ordered to report back by July 15, with the potential for more clarifying legislation to follow.

The review has been specifically tasked with making recommendations regarding “the appropriate scope for ICAC’s jurisdiction going forward.”

The independent panel of experts will be chaired by the former Chief Justice of the High Court, the Hon Murray Gleeson AC QC, and will include Mr Bruce McClintock SC, who conducted a review of the ICAC Act in 2005, the Premier’s office said.

REVIEW OF THE ICAC: ICAC V CUNNEEN [2015] HCA 14
DRAFT TERMS OF REFERENCE FOR THE INDEPENDENT PANEL

Ensuring that the ICAC has the powers and resources required to fulfil its functions is a priority for the NSW Government.

In light of the decision of the High Court of Australia in ICAC v Cunneen [2015] HCA 14, the Panel is commissioned to consider, and report to the Premier by 10 July 2015 on:

•    the appropriate scope for the ICAC’s jurisdiction,
•    any legislative measures required to provide the ICAC with the appropriate powers to prevent, investigate and expose serious corrupt conduct and/or systemic corrupt conduct involving, or affecting, public authorities and/or public officials, and
•    whether any limits or enhancements, substantive or procedural, should be applied to the exercise of the ICAC’s powers, taking into account:

1. the jurisdiction, responsibilities and roles of other public authorities and/or public officials in the prevention, detection, investigation, determination, exposure and prosecution of corrupt conduct, and

2. the report of the Inspector of the ICAC which will include consideration of:

a. the conduct of past and current investigations of the ICAC,
b. whether the ICAC’s powers, and its exercise of its powers, are consistent with principles of justice and fairness,
c. the extent to which ICAC investigations give rise to prosecution and conviction, and
d. whether any limits or enhancements, substantive or procedural, should be applied to the exercise of the ICAC’s powers.