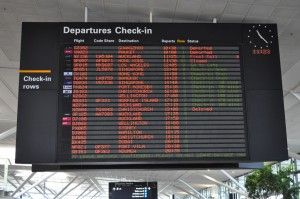 Airports across Australia are bracing for long  delays on Monday 3rd August after the nation’s main public service union warned members at key agencies including Immigration and Border Protection will again walk-off the job amid an escalating industrial row with the Abbott government.

The authorised rolling four hour strikes by the Community and Public Sector Union will hit international airports for the second time in just over a month as the fallout from stalled negotiations spreads across key government transport infrastructure.

The show of force by the CPSU comes as the union continues to accuse the government of trying to deliberately force down take-home pay for many public servants, especially those who were formerly with Customs, by around $8000 a year by removing longstanding allowances and entitlements.

The intensity of staff anger over pay and conditions – which are now in bargaining – stands in sharp relief to the prominent role the new Australian Border Force and Immigration authorities have in applying the government’s  get tough policies on people arriving in or near Australia illegally.

The CPSU is once again capitalising on the high standing which the Abbott government places on frontline staff.

“Public sector workers on our borders undertake important, difficult and sometimes dangerous jobs on behalf of our community. They deserve better than the Abbott Government’s attack on their rights, conditions and take home pay.”

However the union stressed that any of its members “who have essential national security, counter-terrorism and specialist biosecurity hazard roles in DIBP and the Department of Agriculture will be exempt from taking action.”

Meanwhile, the CPSU has also mounted a massive leafleting campaign, distributing more than a million flyers at key public contact points to spread its message.

There is also understood to be growing disquiet and unease in part of the Coalition over the government’s tactical approach to public service pay bargaining now that the row has dragged on for more than a year with the biggest agencies still holding out.

A major frustration is that an opportunity to deplete union ranks of members through apathy, attrition by striking low wage growth deals has been squandered by more ambitious bids to dial back enterprise agreement deal to as close to zero as possible.

One risk for the government is that efforts to play hardball and string-out talks could backfire if Australia’s stubbornly low economic growth and inflation rate pick up. A major part of the justification for many of the offers now on the table has been that inflation has and will remain low and that bigger pay increases cannot be justified.

Employment and Public Service Minister Senator Eric Abetz remains a key target for the CPSU who are now labelling him as a major irritant in negotiations.

“They are facing massive cuts to their current pay packets but the Minister won’t even meet and discuss this dispute with their union,” Ms Flood said.

However Senator Abetz said that it was counterproductive for the CPSU  to organise industrial action “in support of its claim for a 12 per cent pay rise which is utterly unrealistic and would cost the jobs of 10,000 public servants.”

“The Public Service and the Australian people understand the difficult financial circumstances that we face as a nation and therefore the offers that are on the table are reasonable in all the circumstances,” Senator Abetz said.

“We are in a very low inflationary environment and I’d encourage the CPSU to take a more responsible stance.”