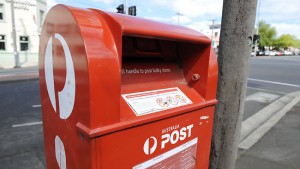 Something has to change at Australia Post. It is losing money with the death of the stamped letter. It is making money from parcels, but the numbers don’t add up.

Led by Ahmed Fahour, Australia’s highest paid public servant, Australia Post announced a full-year loss of $222 million in 2014-15. It is the organisation’s first ever annual loss since it was corporatised in 1989.

The reason is clear. Hardly anybody sends letters any more. Personal mail hardly exists in the Internet era, except for Christmas cards, and even they are in serious decline. Business mail has been the mainstay of the postal system in recent years, but is also declining quickly with the move to online invoicing and statements.

The decline has been obvious for years, but it has been accelerating, not declining. Last year alone addressed letter volumes fell by 7.3 per cent, with ordinary stamped letters falling by 10.3 per cent, off bases that had already declined sharply. Australians now send a billion fewer letters a year than they did in 2008, when mail was already in serious decline.

Australia Post would have got out of this loss-making business years ago if it weren’t for its Community Service Obligation (CSO), a statutory requirement to deliver mail and keep post offices open. For many years the big money has been in its parcel division, now separately branded as StarTrack (Australia Post bought out Qantas’s half share in 2012).

The parcels business is booming, in large part because of Australia’s love affair with Internet shopping, which is growing as quickly as ordinary mail is declining. Products can be ordered on the Internet, but someone still has to deliver the things, and Australia Post is doing well in a very competitive market against the likes of FedEx, UPS and Toll (recently acquired by Japan Post).

Ahmed Fahour wants to restructure the postal part of Australia Post, but he is having to balance this against the Community Service Obligation. No Australian government wants to be seen to be cutting postal services. It is a continuing battle, one which will eventually have to confront commercial reality.

The numbers are stark. Australia Post’s loss of $222 million last year was an enormous turnaround from its $116 million profit the previous year. Revenue was constant at $6.37 billion, with the parcel business comprising more than half for the first time, up 3.6 per cent to $3.21 billion.

Last month Australia Post asked the Australian Competition and Consumer Commission (ACCC) to allow it to increase the price of a stamp by more than 40 per cent, from 70 cents to $1, to “better reflect the cost of the regulated letters service.” The government supports the application, which also. includes keeping the concession stamp price at 60 cents for 5.7 million concession cardholders, and the price of Christmas cards at 65 cents.

Concession and season greeting (Christmas) mail comprise nearly half of all mail sent by consumers. The great majority (97 per cent) of regular mail now comes from business and government, with very few personal letters.

Last week the Senate approved the reforms, which also include reducing the number of post boxes nationally from over 15,000 to the 10,000 specified by the CSO, and cutting 1900 jobs (from 32,000 current full-time and part-time employees). Regular post will still be delivered every day, but it will be slowed down by up to two days to allow for savings on air freight.

It is not certain the changes will be enough to cut the losses. Mr Fahour’s enormous $4.6 million salary will remain, though there may be some cuts to the 400 Australia post managers who earn more than $195,000 a year (a figure from last year’s annual report). Mr Fahour has, unsurprisingly, defended his salary as consistent with that paid to his private sector counterparts. He was formerly CEO of National Australia Bank.

“We continue to make headway with reforming our letters business and we are investing in the infrastructure and digital capabilities – vital to servicing the changing needs of our customers,” said Mr Fahour last week. “We are confident we have the resources, infrastructure and support in place to manage the ongoing transition of our letters business as we become a more e-commerce-centric organisation.”

The Communications Workers Union recognises the need for change, but says reforms should be done “sensibly” and without forced job losses.

“It is abundantly clear that the letter side of the business cannot be profitable in its current form,” said CWU National Secretary Greg Rayner after the losses were announced. “The very encouraging part is the parcel side of the business, which is a huge growth area and will see substantial jobs growth in coming years.

“The digital disruption to letter volumes we are seeing now is nothing new to Australia Post. The company, its hardworking loyal staff and the CWU have adapted before and will adapt again.

“This union was working with Australia Post when it was horses and carts. Our members have transformed it from a network of telegraph wires to one of fibre optics and modern precision logistics.

“We are committed to partnering with Australia Post to transform the business again because that’s the only way to guarantee secure, quality jobs for our members and a reliable, useful service for all Australia.”

Mr Rayner said with the right approach, these results and the reform they demand lay a path to more jobs, better conditions and greater job security for postal workers.

“We have been at the table with Australia Post at the highest level for months now preparing a long term response to reform. In the coming weeks we hope to unveil an Accord to support our members and all Australia Post employees through reform and help guide Australia Post into the future,” Mr Rayner said.

Good luck to him, to Mr Fahour, and to the government. It is something of a race against time, and one that Australia Post has been losing thus far. The postal business continues to decline faster than the parcels business is growing – if losses continue expect Mr Fahour to depart (with his millions) and his successor to initiate a new round of restructuring.

2 thoughts on “Analysis – Where to now for Australia Post?”