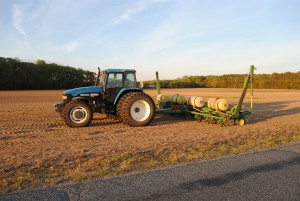 It was promised within 12 months of the last election, which makes it nearly a year late. If the delay was to ensure it would be substantial enough to ensure a positive response, it seems not to have worked. It has been predictably savaged by the ALP Opposition and the Greens, but even amongst the Government’s supporters the reception has been lukewarm.

The document was released on a weekend, meaning reduced media coverage of its contents and people’s reaction to them. President of the National Farmers’ Federation (NFF) Brent Finlay said the White Paper “looks to create a stronger business environment for farmers and generate better returns at the farm gate,” but the NFF statement welcoming the document was essentially a rehash of its announcements.

In an interview reported on the ABC Mr Findlay gave the plan an eight out of 10, saying it would create a stronger business environment for farmers and generate better returns. But he also said the paper could have done more for transport infrastructure and branding of Australian agricultural products overseas.

It is understood that the White Paper’s delay was largely s a result of a perceived necessity to cut expenditure for some of the initiatives proposed in its draft. Then Government’s announcement spoke of a “$4 billion investment in our farmers,” but many of the initiatives have been previously announced, or are part of the Government’s larger agenda, such as deregulation, infrastructure spending and small business tax reform. They are also spread over many years.

“The Agricultural Competitiveness White Paper is an investment in our farmers and our competitive strengths in agriculture,” said Agriculture Minister Barnaby Joyce announcing its release. “This is a vital part of our plan to build a strong, prosperous economy and a safe, secure Australia.” Even agriculture has become part of the anti-terrorism agenda, it seems.

“We’re determined to make the sector even more competitive and to deliver practical actions that will keep our farmers and farming families profitable and resilient. We are lowering tax, cutting red and green tape, building infrastructure, encouraging trade, developing northern Australia, and supporting business to innovate and create jobs.”

The ALP, through agriculture spokesman and former agriculture minister Joel Fitzgibbon, says it is “a grab-bag of promises – some good, some bad and many either vague or on the never-never.

“There is no new $4 billion commitment. This headline funding figure is a mirage, inflated by economy wide non-agriculture specific infrastructure projects, drought figures based on the total value of repayable loans, and is contingent upon unlikely contributions by cash-strapped state governments.

“There is no strategic guidance and no market-based price signals. There is no meaningful recognition of our changing climate and the role sustainability measures and best practice land management programs will play in producing sustainable profitability.”

Under the strapline ‘Stronger farmers, stronger economy’, the White Paper is centred around five ‘priorities’:

A fairer go for farm businesses

“Helping farmers achieve a better return at the farm gate.”

Building the infrastructure of the 21st century

“Planning ahead and thinking innovatively when it comes to our infrastructure.”

“Drought is one of the biggest challenges farmers face and it has a significant impact on agricultural output, productivity and farm incomes.”

“The agriculture sector needs access to the most advanced technologies and practices to continue to farm smarter.”

The White Paper can be downloaded here.